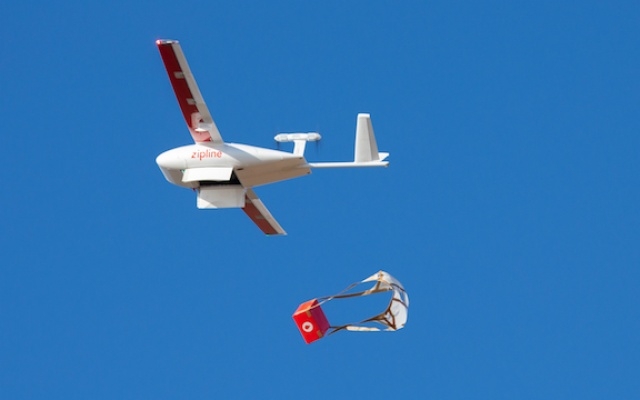 Zipline, the world’s first national-scale drone delivery service, announced on Friday, 1 March 2019 that it is beginning the initial testing and diagnostic flights in Ghana from its first distribution centre in Omenako, Eastern Region.

The revolutionary new service, which will begin operation in the second quarter, will use drones to make on-demand, emergency deliveries of life-saving medications to over 2,000 health facilities across the country.

Ahead of launching its initial testing and diagnostic flights in March, the Ministry of Health and Zipline have begun briefing the public on the safety and security features of the company’s drone delivery service.

“Using drones for emergency medical delivery, Ghana will be able to save money and save lives,” said Dr Anthony Nsiah-Asare, Director General of the Ghana Health Services. “No one in Ghana should die because they can’t access the medicine they need. Drone delivery will help us prevent that.”

“We look forward to working hand-in-hand with the Ministry of Health as we begin emergency medical drone delivery in Ghana,” said Zipline CEO Keller Rinaudo. “An important part of that process is working with the community and key stakeholders to better understand how the system works and all of the work that’s gone into making it the safest at most reliable service of its kind in the world.”

Zipline’s drone delivery service is dedicated to expanding healthcare access and saving lives around the globe. Health workers place orders by text message and receive their deliveries in 30 minutes on average. Zipline's drones both take off and land from its distribution centres, requiring no additional infrastructure at the clinics it serves. Deliveries are made from the sky, with the drone descending to a safe height above the ground and air-dropping medicine by parachute to a designated spot at the health centres it serves.

Because the company’s drones criss-cross commercial airspace daily over both remote and populated areas on their way to deliver critical and lifesaving medicine to people in need, the safety and reliability of Zipline’s service is a top priority. Recently, the United States Federal Aviation Administration announced that it may require the U.S. commercial drone industry in future regulation to adopt the kinds of safety features Zipline has already put in place. The company has taken many steps to ensure that it is operating the safest delivery system of its kind in the world including rigorous testing of flight software and aircraft hardware; flight operations safety procedures; redundant inflight safety features; and modular frangible design.

The company works to improve the quality of its code and service every day to make sure it is operating the safest and most effective drone delivery operation in the world. All software updates are first put through automated software and hardware in the loop testing. Allowing advanced algorithms to assess how the new code and aircraft would perform in the real world.

After passing through simulation testing, all new code is installed onto drones at our state of the art flight testing facility in Northern California, Codenamed Nest X, and pushed to the limits to validate performance. That process is repeated until the system and aircraft are ready to be deployed into global flight operations.

Flight operators physically inspect each aircraft and use cutting edge technology like computer vision during preflight checks to make sure each drone is fit for flight. Because Zipline’s drones fly autonomously along predetermined routes, all of our flight paths are registered in advance with civil aviation authorities.

Zipline is in direct communication with those aviation authorities so that they know at all times when drones launch and where they are flying. Zipline’s sophisticated air traffic control system uses advanced algorithms to make sure all drones in the air know where they are, where they need to go.

Zipline drones are designed to automatically detect issues inflight and safely return to base for repair. Each drone is equipped with redundant flight computers, motors, communications systems, flight control surfaces, as well as redundant navigation and power systems.

In the event of emergencies like severe weather, emergency requests from air traffic control or unplanned flight operation issues, each drone is equipped with a parachute that allows it to make an immediate landing by slowly descending to the ground.

The drones use parachute landings at least once a week during the testing and diagnostic phase of beginning new distribution centres and delivery routes or when the company decides to make deliveries in the face of extreme weather to aid in emergency medical situations.

Zipline’s drones and its parts are designed to break on contact minimizing potential damage to things on the ground. The drone’s core navigation, power, communications, and computing functions are inserted into the drone as a single unit. That unit is housed within a carbon fibre chassis that is protected by an outer styrofoam shell, similar to the construction of helmets. The styrofoam serves to protect anything on the outside of the drone as well as everything on the inside.

Damaged styrofoam is quickly replaced allowing the drone to return to service. The same is true for other flight modules, which include the motors, wings, tail fins and power, navigation and communications unit. If anyone of those units experiences issues, it can be easily replaced with a new one so that the aircraft can return to service saving lives as quickly as possible.

The service will operate 24 hours a day, seven days a week. GHS has selected 148 lifesaving medical products to be stocked at Zipline’s four distribution centres nationwide. Zipline will guarantee delivery of those products upon request to any of the thousands of health facilities served.

Each of the four distribution centres will be staffed by a team of 35 Ghanaian engineers and logistics personnel, equipped with at least 20 drones. Together, all four distribution centres will be capable of making at least 600 on-demand delivery flights a day. The drones can carry 1.75 kilos of cargo, cruising at 110 kilometres an hour, and have an all-weather round trip range of 160 kilometres.

Zipline is an automated logistics company based in California. The company—which includes seasoned aerospace veterans from teams like SpaceX, Google, Boeing, and NASA—designs and operates an autonomous system for delivering lifesaving medicine to the world’s most difficult to reach places.