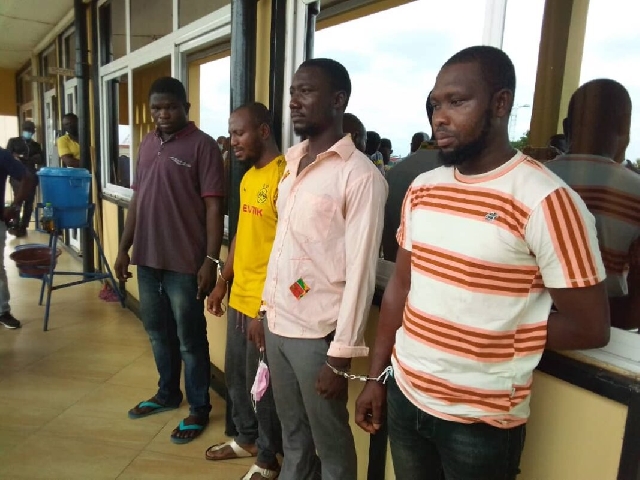 The Ashanti Regional Police command has arrested four suspects for their involvement in various cases of armed robbery in the region.

Addressing the media today, Wednesday, 2 June 2021, the Public Relations Officer of the regional police command, ASP Godwin Ahianyo, said the suspects, on 25 March 2021, shot and killed an engineer with Joshop Construction and robbed him of his Toyota Prado with registration number GN4131-20.

The victim, Mr Emmanuel Antwi, 40, was rushed to the Komfo Anokye Teaching Hospital but died later while on admission.

Mr Ahianyo said the same suspects were involved in a robbery incident that took place on 4 April 2021, where the victim was robbed of his Toyota RAV 4 at gunpoint at Kenyase Bampenase, a suburb of Kumasi.

He said investigations also revealed that they were the same armed robbers who attacked and robbed the Municipal Chief Executive of Asokore Mampong of his Toyota Hilux with registration number GW 2473-16 on February 12, 2021.

ASP Ahianyo said they again attacked and robbed another victim on 15 April 2021 of his unregistered Range Rover at Buokrom F-line.

He further said on 25 April 2021 around 9:00 pm, suspect Mustapha Adams together with two of his accomplices who are on the run, again robbed a Honda Accord DV-trade-plated car with registration number 4894A at Achiase near Kenyase.

ASP Ahianyo said on 28 April 2021, Mustapha Adams and Mohammed Abubakar also attempted to rob a DV-trade-plated Toyota 4 Runner at gunpoint at Kenyase Abram but luck eluded them and were arrested by the police.

He said they later led the police to arrest the other two suspects and have all been arraigned and remanded into police custody to assist the police with investigations.