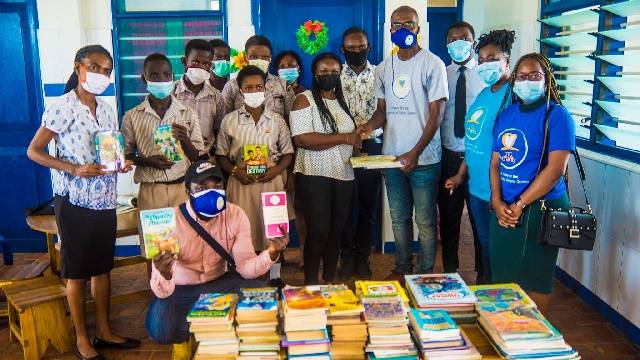 Some of the beneficiaries with the 2112 charity team

A non-profit organisation, 2112 Charity has donated to some 800 reading books to two schools and a community library in the Korle-Gonno, a town in Accra to encourage reading among students.

The beneficiary schools were Hijaz Islamic Basic School, Hampstead Academy, and the Korle-Gonno community library. The library received about 500 books out of the number while the remaining number was shared between the two schools.
The Founder of the 2112 Charity, Mr Joseph Lawrence Nii Ayikwei Hammond indicated that the gesture formed part of his commitment to giving back to society.

“It is our desire to support the education of children and improve their academic standing,” he said during the presentation of the books. 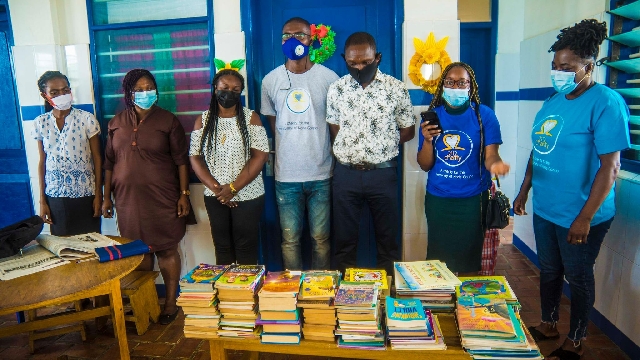 According to him, their long-term goal is to put up an Information and Communication Technology lab in the Korle-Gonno community to equip students with technology-based knowledge and skills.

The Head of Librarian of the Korle-Gonno community library, Mrs Joan Owusu Asare  who received the books on behalf of her outfit, said “These books will help to better and enrich the vocabularies of the students. Their reading skills will also be enhanced,” she acknowledged.

Meanwhile the Headmaster of the Hampstead Academy, Mr. Francis Hammond expressed great joy after receiving their quota of the donation on behalf of the school.

“We had the number of Non-Governmental Organisations which came and made promises to give us reading books but they never returned. So we are grateful to 2112 for this gesture,” he stated.

The Headmistress of the Hijaz Islamic Basic School, Ms Ellen Adjaye-Gyamfi also said the gesture of 2112 Charity was laudable and worth emulating.

Mr Hammond further disclosed that the organisation was sponsoring one student, now in her second year in the university.

“The student completed St. Mary’s Senior High School, Korle-Gonno, and successfully gained admission to the Kwame Nkrumah University of Science and Technology to read BSc in Material Science and Engineering”.

Talking about other initiatives, Mr Hammond said the organisation intended to collaborate with the Assembly Member of the Korle-Gonno electoral area, Mr Ivan Esinam Tekpli to sensitise students in the community on the importance of reading. The sensitisation aimed to arouse the interest of students to patronize both the community and school libraries.

The Founder appreciated Cranmer Primary School, based in the United Kingdom, the Quarshie Family (UK), his colleagues, friends, and families who had supported the 2112 Charity community development initiative since its inception in 2015.

He appealed to the indigenes of the Korle-Gonno community and other well-meaning individuals and corporate organisations for support.