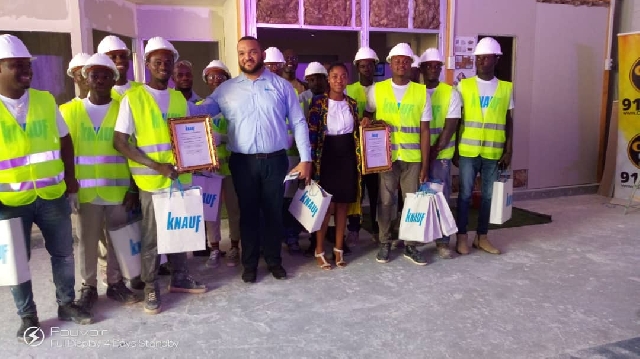 Students of the Central University and the National Vocational Training Institute (NVTI) have been crowned winners of the maiden edition of the Knauf Build-It competition held in Accra last Friday.

Referred to as B6, the two institutions, which were merged, shrugged off stiff competition to beat Accra Technical University after recording 72 points to walk away with the ultimate prize.
Both teams received a cash prize, books and souvenirs from the organisers while the winners would have a ceiling renovated at their schools.

After three weeks of training, the students were directed to construct a studio house (a bedroom self-contained house) in a limited space at the Knauf Training Centre at Accra Industrial Area.

Knauf, a German construction firm, is one of the world's leading manufacturer of modern insulation materials.
The exercise was targeted at equipping the construction students with modern building techniques to improve upon the construction industry after graduating from school.

The Commercial Manager of Knauf, Hans Kisseih commended the students highly for their efforts and advised that they utilisre the space to produce a nice edifice.

"Since the inauguration of the training centre about two years ago, we have trained close to 500 students with modern technologies to help them in their career after school,” he stated.

He added that they were excited young people are getting interested in building and updating their knowledge to come out with very modern and quality edifices.

The criteria used for judging the students include economy of design, functionality, ventilation, internal design, timing and construction.

The head judge urged the participants to apply the training they acquired to improve upon structures in the country and help build a stronger industry.