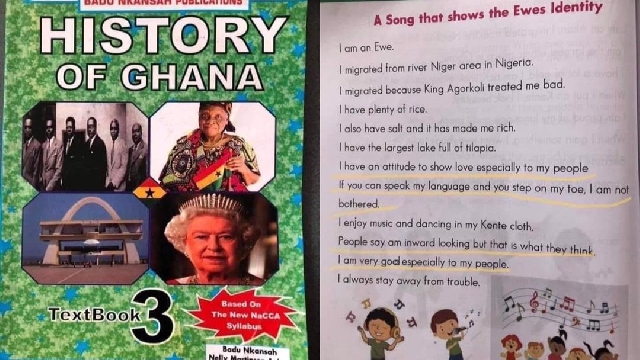 The Minority spokesperson on education, Peter Nortsu-Kotoe, has condemned the portrayal of tribal bigotry in textbooks for schoolchildren.

A statement issued by the Akatsi North lawmaker noted that “not only do the books contain very distasteful sentences/paragraphs” but also, “it begs to say that the more you flip the pages, the more enraged you become as an Ewe at the attempt to re-write our history and paint a gloomy picture about us to the next generation”.

The statement further noted: “I wish to put on record that these publications are not in resonation with our quest for national cohesion as a country. Education is supposed to inform and disabuse people's mind against ethnic stereotyping, bigotry and other unhealthy impressions”.

“Unfortunately, these books are rather out there to do the reverse, thereby sowing a seed of discord amongst us”, he said, adding: “To correct the wrongs, it is only appropriate that the books be recalled and taken out of the market completely,” it added.

Mr Nortsu-Kotoe said: “I will equally lead the Volta MPs Caucus to make an official statement on the issue on the floor of Parliament to demand that the relevant bodies in charge of our educational sector do the needful to correct this offensive, divisive and despicable act”.

The textbooks by Ghanaian-owned publishing company, Badu Nkansah Publications, have been widely condemned for featuring ethnocentric contents about Ewes and some other ethnic groups in Ghana.

Badu Nkansah Publications apologised to Ghanaians for the circulation of their History of Ghana Textbook 3, which features the condescending content.

In a statement, the publishing company said: “Following the introduction of the new curriculum by NaCCA, we submitted a textbook application for approval for our book History of Ghana in January last year. We received a response to our application from NaCCA on 25th September (Reference NaCCA /G14).”

It continued: “The NaCCA raised concerns with portions of the book even though they informed us that the book had satisfied most of the technical and content requirements. They, however, told us to work on certain aspects of the book further in order for it to meet the expectations of the new curriculum”.

“An attached comment which accompanied the report detailed areas of particular concern which we are still in the process of complying with.”

The Publishing Company further continued: “Unfortunately, while undergoing the review, a limited quantity of the unpublished draft found its way into the market.”

It also stated: “We have seen certain snapshots on social media which has generated justified public uproar due to its offensive tone. Though it is not a deliberate attempt to berate such a huge section of our society, we wish to unreservedly apologise for the slip.”

The Company stressed: “Our brand stands for national unity and we currently employ workers who originate from all parts of the country”.

“How those few copies found their way to the market is something we are still investigating, and we will make investigations public when we are done.”

It added: “We apologise to all those affected and we wish to assure all Ghanaians such a thing will never happen again.”

The National Council for Curriculum Assessment (NaCCA) had earlier noted that its attention had been drawn to the fact that the books, “which have not been approved for use in schools, are on the market.”

NaCCA asked the publishers to withdraw the books from the market with “immediate effect,” as well as other “unapproved books” that they may have on the market.

The Council further asked the publishers to “issue an unequivocal apology through the electronic, print, and social media.”