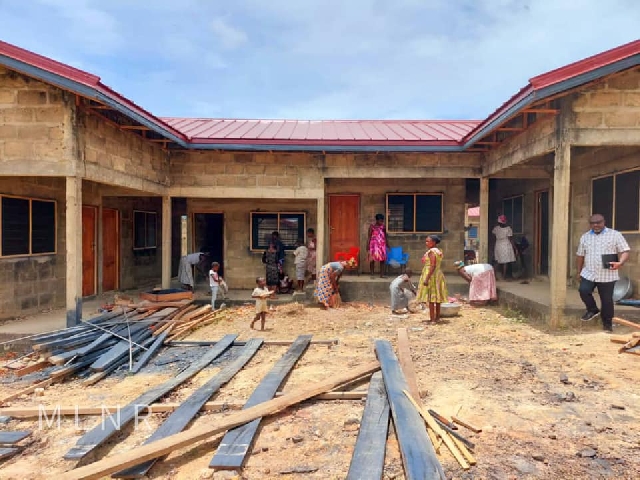 The Appiatse Reconstruction Implementation Committee is right on schedule as the temporary structures earmarked for the resettlement of the explosion victims are 98% completed for relocation on 4th May 2022.

The Deputy Minister for Lands and Natural Resources, Benito Owusu-Bio says citizens are to start moving into the 32 completed rooms while works on the other two per cent are continued for the official relocation, explaining that the 1st May relocation date has been rescheduled for 4th May 2022 to make way for the Holiday Festivities.

Addressing the media on his last inspection visit to Appiatse, ahead of the relocation of victims to the temporary structures, on Thursday, 28th April 2022, Hon. Owusu-Bio said the bid for contractors to win the opportunity to design and rebuild Appiatse begins on Friday, 29th April 2022.

The Ministry of Roads he said has also promised to commence layouts of the road networks for the new Appiatse community and this he assured will be done side by side with the bidding process.

Mr Owusu-Bio hoped that by the time the road networks are completed, his team would also be ready with the awarded contractor for work to begin as scheduled.

Mr Owusu-Bio who is also the Chairman of the Appiatse Reconstruction Committee expressed his joy, having been able to meet the May Completion deadline promised by the government, this he said will afford his team the opportunity to focus on the main reconstruction works.

"The President Akufo-Addo led government always delivers on its promises, that is why we are witnessing this success today. As works are completed here, it will give us the time we need to now focus on the main work at the Appiatse site itself. I am particularly happy to see the people from the community already cleaning up the completed rooms for moving which only tells that they are equally happy and impressed with the work done here."

The Deputy Minister asserted that government is also in talks with partners and stakeholders including the Ghana Water Company, Electricity Company Ghana and the Vodafone Foundation, among others who have shown their earnest commitment to commencing the project with a focus on the core part destroyed by the explosion.

He reiterated the government's commitment to continue in its effort to reconstruct the new Appiatse community while applauding them for their patience and support for the persons working on the site.

On behalf of the Sector Minister, Mr Owusu-Bio thanked Ghanaians for their support for the Appiatse Support Fund while admonishing that "we are not done until we restore normalcy to this area and so we will continue to seek for your support towards the main work and take this as doing it for yourselves"

Members of the community also expressed their utmost appreciation to the government and the Ministry for doing as promised saying that they really look forward to the official relocation which will save them from the wrath of the rain.