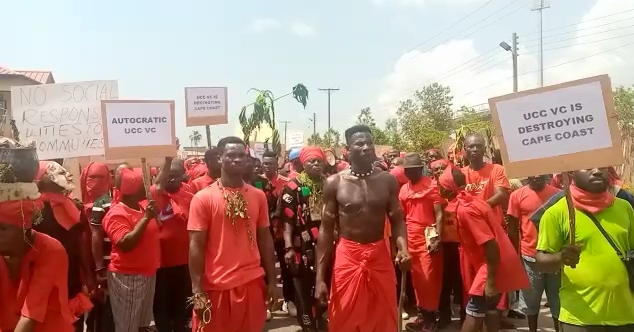 The chiefs and residents of some communities surrounding the University of Cape Coast, including Kwaprow, Amamoma, Akotokyir/Kakumdo, all in the Cape Coast Metropolis of the Central Region, have staged a demonstration against the Vice-Chancellor and the authorities of the university.

The demonstration was to register the displeasure of the chiefs and people of the communities over the encroachment of their lands by the university community.

The demonstration was held on Wednesday, 30 November 2022, through some principal streets of Cape Coast with a petition presented to the Regional Minister and the UCC.

The demonstrators, clad in red, wielded placards, some of which read: “VC is destroying our ancestors' tombs', 'Autocratic UCC VC', 'UCC VC is destroying Cape Coast',” among others.

According to the demonstrators, the authorities of the university have taken over their lands, leaving them with nothing.

They are, therefore, calling for the removal of the VC, who, they claim, is insensitive to their plight.

Speaking to Class91.3FM’s Central regional correspondent, Nana Tawiah, a female demonstrator said: “The VC is saying our father, Kwame Nkrumah, acquired the land; Kwame Nkrumah did not pay for the town; Kwaprow was there before the university was built, he should give us our land.”

Another female demonstrator explained: “When Kwame Nkrumah came for the land, he did not pay. This town was also there before the university was built, we want our land that’s all.”

The residents accused the university authorities of pulling down their buildings and structures while claiming the land as theirs.

“The VC has taken over our land, we can’t even get any to build, so we’re taking our thing, Kwame Nkrumah did not pay 1000, he did not pay anything, for the land, so VC, we’re pleading with you to release our lands,” an angry demonstrator stated.

They also indicated that the university authorities have served them notice to vacate the land.

“Now they claim they’re evicting us, we won’t understand, because our children are still alive,” a demonstrator bemoaned.

Addressing the media, following the demonstration, the Director of Public Affairs at the UCC, Major Rtd. Kofi Baah Bentum indicated that the university has no land dispute with the traditional rulers of the area.

Mr Baah Bentum noted that calling for the removal of the VC was unnecessary since the VC had not played any role in the acquisition of the land and stressed the role of the university in the development of the communities surrounding it.

He urged the general public to disregard the claims by the residents, as they were false.