E/R: Nothing satanic about Christians being chiefs – Daasebre Ayimadu 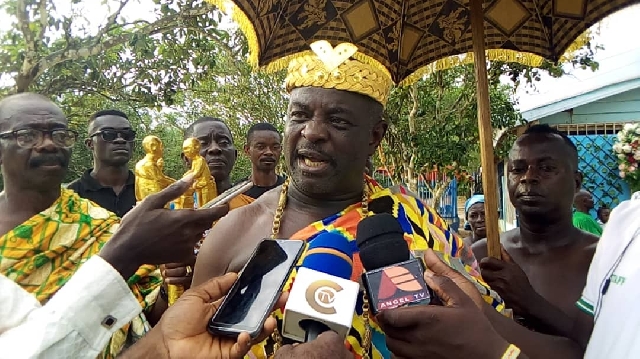 The Okyeman Gyaasehene, Daasebre Ayimadu Kantomanto, has called on Christian leaders to allow their members to be made chiefs in their villages and towns, since, according to him, there is nothing satanic about chieftaincy.

In his view, being a traditional leader offers Christians a golden opportunity to purify and Christianise the chieftaincy institution and, thus, urged Christendom not to let the opportunities slip by, adding that this is a situation that can be used to transform cultures.

Daasebre Ayimadu made this call while speaking with Accra100.5FM/CTV news reporter Apelete Kofi-Michel at a day’s capacity-building programme on ‘Chieftaincy and Rulership Institutions in Ghana for Chiefs and Queens’, as part of the Okyeman Development Agenda at Asamankese in the Eastern Region.

He observed that the main challenge hindering Christians from becoming chiefs was the rituals associated with the coronation, but said this could be navigated through a dialogue between Christians and the traditional authorities.

The Kwabenghene said the pouring of libation, for instance, was a controversial topic that could not be done away with completely even though it is incompatible with any form of Christianity in the country.

He noted that this act is peculiar to African religion and also has become part and parcel of the Judeo-Christian tradition.

He said issues of periodic food, blood sacrifices, and ancestral stools and worship could be looked at and re-interpreted for Christians, who are qualified to be made chiefs so they could rule society with the fear of God noting that chieftaincy is basically a leadership role and not so much of rituals.

Evangelist Douglas Oduro, the Director of the Guankobea Prayer and Retreat Centre also called on all Ghanaians and Christians to respect their chiefs.

Mr Oduro said chieftaincy is a profession and, thus, called on chiefs and traditional leaders to be leaders in their various roles.

He explained that chieftaincy is an integral part of African society, especially in Ghana, and for that matter, Christians must embrace it.