Otumfuo wonders why galamsey prevails though Akufo-Addo staked his presidency on it; ‘something is wrong somewhere’ 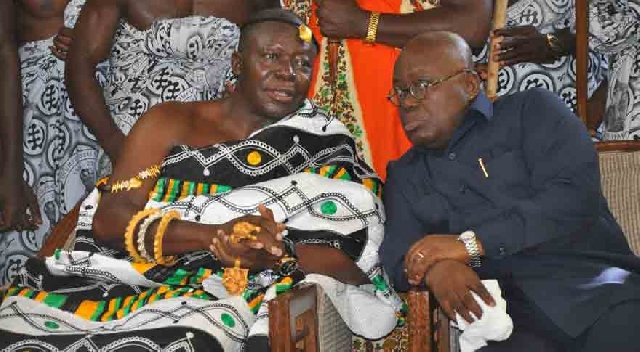 Some finality should have been put to illegal small-scale mining (galamsey) by now after President Nana Akufo-Addo staked his presidency on it, Asantehene Otumfuo Osei Tutu II has said.

Speaking at a meeting with the new US Ambassador to Ghana at the Manhyia Palace, the Asante monarch said: “At the district level, we have the political administration, district chief executive, and the security council. Are they all saying that they are unaware of the activities of these galamseyers?”

“If they are unable to detect and stop the operation of these galamseyers then they are unworthy to be there, it is as simple as that”, the chief noted.

“We should have brought finality to this issue by now”.

“The President had even put his presidency on the line, and yet this is going on. To me, something is wrong somewhere”, he added.

A few days ago, Akonta Mining Limited, which belongs to the Ashanti regional chairman of the governing New Patriotic Party (NPP), Mr Bernard Antwo-Boasiako (Wontumi), was stopped from mining in the Tano Mimiri forest reserve.

The stop order was contained in a statement issued by the minister on Friday, 30 September 2020.

The ministry said it has taken note of “publications about certain operations by Akonta Mining Limited in the Tano Nimiri forest reserve in the Amenfi West municipality in the Western Region”.

Mr Jinapor, according to the statement, has, thus, Forestry Commission to, “forthwith, ensure that the company does not carry out any operation in the Forest and to take the necessary action against any person found culpable in this matter”.

The statement said: “Our records show that Akonta Mining Ltd, on August 25, 2022, applied for a mining lease to undertake mining operations in the said forest reserve. By a ministerial directive, all reconnaissance, prospecting and/or exploratory activities in forest reserves in the country are suspended, except in exceptional circumstances”.

“Although this directive does not affect mining in forest reserves, Akonta Mining Limited’s application has not been determined. Accordingly, any alleged activity being undertaken by the company in the forest reserve is illegal”, the statement noted.