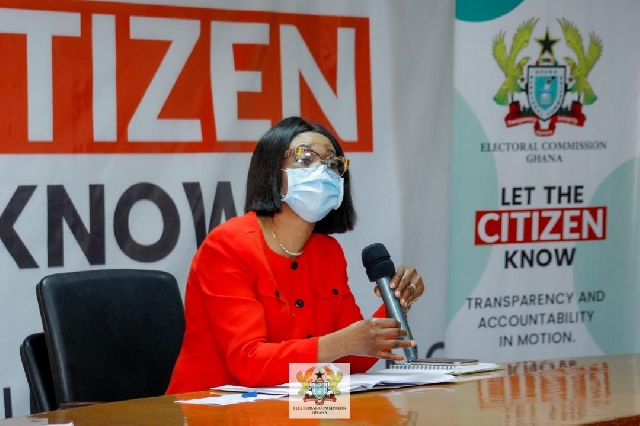 Some 109,557 Ghanaians made up of security personnel, media practitioners and staff of the Electoral Commission will be voting today, 1 December 2020.

The early voting is arranged for voters who fall in the three categories since they would be busy on Election Day, 7 December 2020.

She said: “It is instructive to note that this is the highest number the Commission has recorded for special voting in its history”.

She also denied claims that the names of some security personnel were deliberately deleted from the special voting list, adding that even some names that were presented after the deadline, were considered.

“It is also important to mention that the Commission received a number of names well after deadline. While some were considered, others came a little too late after the data base had been frozen. Once the data base is frozen no changes/transfers can be made. All lists received after the data freezes could not be processed.

“We entreat the Public to disregard information going round on social media by some ‘experts’ that the Commission has prevented security agencies from registering. This is not true. Every officer who applied on time, and provided the correct ID card number was duly registered”.

“Unfortunately”, she added: “we rather had an issue with our media partners who have collaborated with us all this while. There were some discrepancies regarding the lists submitted by the GJA. The soft copy of the list was different from the hard copy which contained more Applicants. Unfortunately, this was not made known to the Electoral Commission’s team”.

“As such only the names in the soft copy were reflected in the special voting list. The Commission regrets this and wishes to assure the GJA and NMC and Journalists in general of our support to their efforts. To mitigate this, the Commission has instructed its field officials to give preferential treatment to media personnel who possess the accreditation cards of the Electoral Commission”.

Mrs Mensa noted that “all is set for the special voting on Tuesday”, adding: “To date, officers have been recruited and trained”.

Also, she noted, “all materials have been distributed in sufficient quantities and the BVD’s prepared and deployed. We expect a near 100% turnout and are confident that the outcome will be peaceful, credible transparent and orderly God being our helper. As the good book states a horse is prepared for battle but victory comes from God. We will keep you updated on the outcome of the Special Voting in the course of the week”.