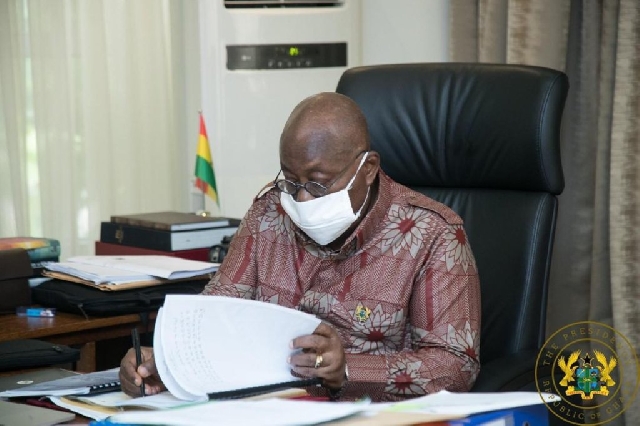 Former Special Prosecutor Martin Amidu has told President Nana Akufo-Addo that his office, as far as the procedure adopted in granting Executive Approval to the controversial Agyapa Royalties transaction is concerned, failed the corruption and anti-corruption risk test.

In his resignation letter to the President, the anti-corruption crusader, who accused the President of politically interfering with his probe into the Agyapa deal, said: “More importantly, Your Excellency was acting as a judge in your own court, in usurping my functions to take any independent follow-up actions on the anti-corruption assessment report when you [President] knew from my 13-page letter of 16 October 2020, conveying the conclusions and observations of the anti-corruption assessment report to you that negative anti-corruption assessment had been made against the conduct of your office in the procedure adopted in granting the Executive Approval dated 24 March 2020 and your assent of the Minerals Income Investment (Amendment) Act, 2020 (Act 1024) on 27 August 2020 intended to retroactively impact the parliamentary approval of the transactions document granted on 14 August 2020”.

Mr Amidu explained: “Pages 31 to 33; and 52 to 53 of the full 64-page report, submitted to you on 2 November 2020, contains the detailed anti-corruption assessments on these matters. The total of the foregoing interventions by you in my functions, make my position as the Special Prosecutor, untenable”.

The former Attorney General also, directly told the Commander-in-Chief of the Ghana Armed Forces that he could not direct him about as far as his handling of the corruption and anti-corruption assessment report of the deal was concerned, adding that he refused to “bargain” with the President, who insisted he (Amidu) infuse Finance Minister Ken Ofori-Atta’s comments about the deal, into his (SP’s) final report.

Mr Amidu, in his corruption and anti-corruption risk assessment report on the deal, said the Transaction Advisor(s) involved were susceptible to “nepotism, cronyism and favouritism”.

In his resignation letter to the President dated Monday, 16 November 2020, however, Mr Amidu revealed that the President, on several occasions, pestered him to either freeze the report or add his cousin’s comments to the report.

He said: “After receiving my letter under reference on 19 October 2020, you ordered your Chief of Staff on 20 October 2020, to deliver an urgent message personally to me on the same day”.

“When she could not reach me on telephone, she decided to invite me in writing in her letter with reference number OP/COS/015 dated 2o October 2020, stating that: ‘I have been directed by HE the President of the Republic, to deliver an urgent message personally to you, today, 20 October 2020. I am looking forward to seeing you as requested’.

“I received the Chief of Staff’s letter the next morning, 21 October 2020, and reported to her office as requested. The message she delivered to me was that: You had instructed that I was not to do anything about my report on the Agyapa Royalties Transaction until I had met you on Friday, 23 October 2020.

“You were away in the Volta Region when I met the Chief of Staff.

“I met Your Excellency in your office in the afternoon of 23 October 2020 and I underscored the fact that my letter dated 16 October 2020 to you was sent out of the necessary courtesy of prior information to your office as President of the Republic and the Commander-in-Chief responsible for national security.

“I also underscored the fact that the analysis of the risk of corruption and anti-corruption assessment, was conducted professionally, and could not be reviewed by the Minister of Finance or yourself, and my letter was particularly not intended for you to direct me as to how to conduct the duties of my office.

“Your Excellency insisted that I should withhold any further action on the report for one week. I reluctantly agreed to your terms but gave you notice immediately that I did not intend to continue as the Special Prosecutor because of your interference the performance of my functions under the law.

“You eventually invited me to your office in the evening of Sunday, 1 November 2020, where I, again, asserted that I was not going to bargain over the independence of my function as the Special Prosecutor.

“I refused to take the copy of the alleged comments from the Minister of Finance you offered me, as that would have compromised my independence as the Special Prosecutor.

“I also refused to shelve my report to enable you handle the matter, which explains my press release to the public on the morning of 2 November 2020 and the follow-up with the distribution of the full 64-page Agyapa Royalties Transactions Anti-corruption Assessment Report to the Public.”

“Unbeknownst to you that I had published the full 64-page report to the public, you caused a press statement to be made based on my letter dated 16 October 2020 to you under reference which sought to politicise and downplay the seriousness of the professional analysis of the risk of corruption and anti-corruption assessment reported by my office”.

According to Mr Amidu, “the 64-page analysis of corruption and anti-corruption assessment report, discloses several serious corruption and corruption-related offences in respect of which I intended to open full investigations as the Special Prosecutor.”

“I cannot do that now after your political interference in the performance of functions of the office for two weeks – from 20 October 2020 to 1 November 2020 – culminating in your directives on how the anti-corruption assessment report of Agyapa Royalties Limited Transaction by this office should be handled by the principal suspects disclosed by the anti-corruption assessment report”.