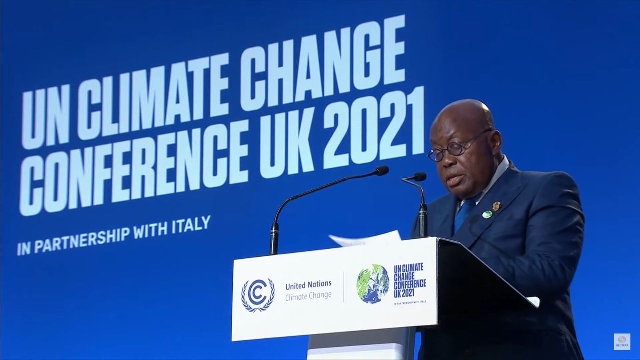 “We’re naturally, very disappointed by the failure of the wealthy nations to honour their commitments of making available $100 billion annually to the poorer countries to assist us in the fight against climate change, and by the unavailability of the technology transfer that will help us find sustainable ways of charting a path out of this existential crisis,” the Ghanaian leader said.

President Akufo-Addo said this today, Tuesday, 2 November 2021 when he delivered a statement on Ghana’s position on Climate Change, as well as measures put in place to combat the threat it poses at the ongoing climate change summit in Glasgow, Scotland.

The COP26 Summit, which is one of the largest gatherings of world leaders, has brought together parties to accelerate action towards the goals of the Paris Agreement and the UN Framework Convention on Climate Change.

President Akufo-Addo told the world leaders that Africa is the least contributor to the damaged caused to the climate but yet the continent is the most affected.

“Even though we, in Africa, are the least of the contributors to this phenomenon, responsible for less than four per cent of the global volume of carbon emissions, we suffer the most because our agrarian and resource-driven economies are particularly susceptible to the effects of climate change, and our capacity to withstand its shock is weak,” Nana Akufo-Addo said.

He noted that it will be unfair for rich, developed countries to suggest that Africa should not explore her natural resources to help combat climate change when the exploration of those resources are needed to finance Africa’s development.

“Those same nations are, however, insisting that we abandon the opportunity for rapid development of our economies. That would be tantamount to enshrining inequality of the highest order, a totally unacceptable conclusion,” he noted.

To this end, he said “Ghana, therefore, supports the call for the debt-for-climate swaps which will address a multitude of issues in one fell swoop.”

He further advised the world leaders to “use this summit as a turning point to create a more prosperous, greener and fairer world, which maintains the balance between the social, economic and environmental requirements of all nations of the earth, rich and poor,” adding that “success, in this endeavour, is the greatest inheritance we can leave for current and future generations.”