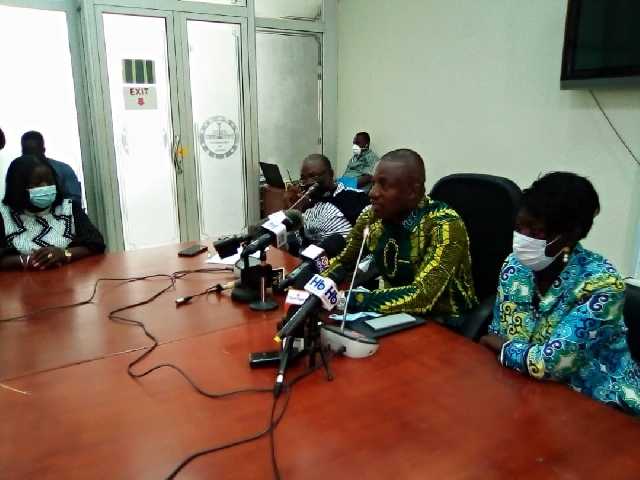 The Minority in Parliament has put forward a 10-point recommendation to help the government to resolve the current energy crisis (dumsor).

The Minority caucus, at a press conference today, Wednesday, 28 April 2021, accused the government of engaging in "unnecessary politics" with the energy sector.

The caucus’ spokesperson on energy, Mr John Jinapor, who addressed the press conference, among other things, cited executive interference in the power sector, as part of the reasons state transmitter Ghana Grid Company Limited (GRIDCo) has been reluctant in issuing a load-shedding schedule.

According to Mr Jinapor, the Akufo-Addo-led government “consistently made losses for the past four years” in the energy sector as compared to the Mahama era of profits in the sector.

In his view, “the energy sector is bleeding”.

Addressing the media, Mr Jinapor said: “From the foregoing, it is obvious that the current load-shedding, popularly known as dumsor being inflicted on Ghanaians, is a direct result of mismanagement and unnecessary political interference by the Akufo-Addo-led government as far as the management of the sector is concerned”.

“We, therefore, hold President Akufo-Addo and his government directly responsible for this avoidable, embarrassing spectacle that we've had to witness today,” he added.

He further outlined the Minority caucus's 10-point recommendation in dealing with the energy issues.

1. The Energy sector players must be proactive and inform (Publish a schedule) electricity consumers who will be affected by these outages in advance so that affected customers can take remedial steps to mitigate the effect of such outages.

2. Government must cut down on wasteful expenditure and Inject the much needed capital into the power sector especially GRIDCo to make up for the impaired cash flow of these utilities.

4. Government and its communicators must desist from engaging in the propaganda on excess capacity and come out with a formula for absorbing capacity charges as part of operating cost.

5. Power sector managers must ensure that they pursue Long term planning to ensure fuel security for generating assets at the least cost possible.

6. Government must allow Independent Power Producers (IPPs) to take the responsibility for their fuel supply requirements.

7. Immediate steps must be taken to aggressively address ECG’s spiralling technical and commercial losses currently estimated by its worker unions at 34%

8. The Ministry of Energy must conduct a comprehensive reconciliation of the total indebtedness of all players including government and its SOEs including (GNPC, GNGC, VRA, GRIDCo, CENIT, ECG, NEDCo) in a transparent manner.

9.The Ministry of finance must take steps to utilize the $1 billion sovereign bond borrowed in 2020 to address the financial challenges of the Energy sector.

10. Government must ensure that Energy sector SOEs Publish details of their financial statements including details and ageing of their indebtedness as well as debts owed to them on time.

The Minority in Parliament therefore called on government to “come clean on the current power crisis as a matter of urgency and desist from engaging in blame games. Shifting blame and providing conflicting information only goes to exacerbate the crisis which is threatening lives and businesses across the country”.