E-block: Retract, apologise to Aflao chief over 'build it yourself' comment – Ablakwa to Akufo-Addo 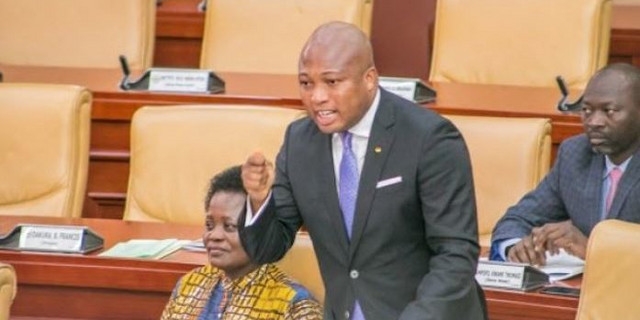 The Member of Parliament for North Tongu, Mr Samuel Okudzeto Ablakwa, has called on President Nana Addo Dankwa Akufo-Addo to apologise to Torgbui Adzongaga Amenya Fiti V and the people of Aflao for telling the chief to go ahead and complete the Afloa E-block if he feels it has taken too long to be completed.

The GHS ¢9-million project, which was one of many started by the Mahama administration, was expected to serve the residents of Aflao and its environs but was abandoned after Mr Mahama left office in 2017.

Speaking during a courtesy call on him by Minority MPs on the Education Committee of Parliament on Wednesday, 20 October 2021, after the opposition lawmakers’ nationwide tour of some of the abandoned projects, Togbui Fiti said: “Aflao is the only urban community in Ghana without a senior high school but day-in-day-out, my friends in the media only carry bad stories about Aflao”.

“They’ll not come and comb the area and see why these people are always thieves, smugglers and why we are always going to Togo. These are research the media and government have to do.”

“After the BECE, our children now begin to struggle for space in schools elsewhere and, so, this thick population, in most cases, has no place to go”, he bemoaned.

He added: “I had to push former President Mahama to bring that project [E-block] here. I had to be running from here to Accra, begging; should we beg for education? If we have to beg for education before our people have to go to school, then I don’t know what democracy means but now, look at the structure standing over there, 90% complete. Now in the era of the NPP, we have the Free SHS but my people are not benefiting because the school is not here”, he noted.

“Your [lawmakers] coming here is redemption to the suffering people of Aflao. Carry this message to the Minister of Education that come February, I want this school to be opened.”

Responding to the chief during an interview on Accra-based Peace FM on Thursday, 21 October 2021, however, President Nana Akufo-Addo wondered if it was in the place of the chief to issue such an ultimatum and then suggested that he complete the project himself.

Mr Akufo-Addo also told Kokrokoo host Kwame Sefa Kayi that: “One of the things, I suspect, is a deficit on our part is our ability to counter propaganda. The propaganda takes over the reality of so many aspects of our national life. It’s a pity but we’ll continue”.

Reacting to Mr Akufo-Addo’s response to the chief, Mr Ablakwa said “no chief anywhere in Ghana should be spoken to with such derision, disrespect and condescension”.

In a Facebook post, Mr Ablakwa said: “Our revered chiefs and custodians of our proud traditions deserve utmost respect at all times regardless of which part of the country they exercise their authority.

“The venerable Torgbui Adzongaga Amenya Fiti V and the people of Aflao deserve an immediate retraction and apology from President Akufo-Addo.

“No chief anywhere in Ghana should be spoken to with such derision, disrespect and condescension.

“Torgbui Fiti V rather deserves commendation for his courage in speaking out against the reckless wasteful culture of abandoning inherited projects.

“We are one people united in our collective successes and challenges; intemperate language from the President who ordinarily should be strengthening national cohesion with his pronouncements ought to be condemned by all well-meaning Ghanaians.”