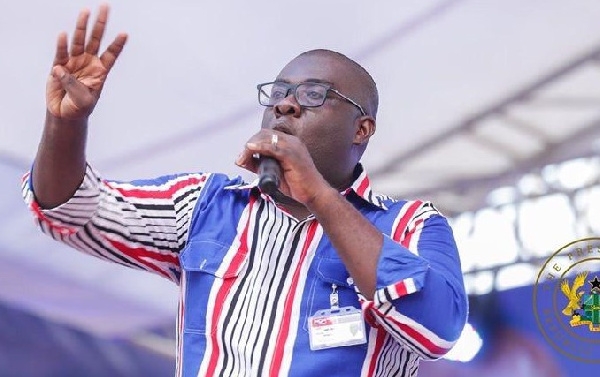 The National Organiser of the governing New Patriotic Party (NPP), Mr Sammi Awuku, has warned the various camps of presidential hopefuls in the party that their subtle and veiled campaign activities at funerals, risked dividing the party ahead of the 2024 polls and destroying the NPP’s chances of breaking the 8-year jinx.

“There is a growing trend that as Constituency Chairmen, we have to be very tough on”, Mr Awuku said on Saturday, 17 July 2021 at the launch of the NPP’s Constituency Officers’ welfare in Koforidua, capital of the Eastern Region.

“Whoever is a beneficiary or victim, we just have to put our foot on the ground”, he urged, explaining: “There is a growing sense and strategy of turning funerals into campaigning grounds for would-be presidential candidates”.

“As much as possible, the constituencies are expected to preserve the unity of the party”, Mr Awuku noted.

He said “When it turns out that because you are active constituency executives, you play the ostrich, stand aside but send our youth organisers to mobilise people to cheer Mr ‘A’ or Mr ‘B’, chairmen, they make your work difficult”.

Mr Awuku warned that: “If we are not careful with the internal primaries and party discipline, we may end up breaking ourselves before breaking the 8”.

“President Kufuor’s statement still resonates in our ears: It is better to be a messenger in a party in government than to be a General Secretary for a party in opposition”, he said at the Constituency Officers Welfare Fund launch.

It’s interim National Chairman, Dr Akyea Darkwa, who is the Asuogyaman Constituency Chairman, explained the rationale behind the fund: “Some of us, when we came into the seat, we identified that there were so many challenges that were bedevilling the base of the party and we saw that most people are expecting that the presidency or the government solves all our problems for us, which we know is impossible. So, we decided that there are some of the challenges that we can solve ourselves, so, why don’t we do it. So, we solicited ideas from the constituency chairmen for this welfare fund”.

Inaugurating the fund, the party’s national chairman, Mr Freddie Blay, said in pursuit of the “breaking the 8” agenda, the fund was timely.

“In many other countries in the world: South Africa, Germany, Morocco, the parties are able to organise themselves such that they get themselves involved in commercial activities to help assist each other when in problem. We don’t expect a party to be sustained from the central government’s coffers, no. Ideas can be developed such that the party will have resources from ourselves and from our networks”.

“We must put Ghana first, as a party, to build a sustainable future. That is why we should discuss the welfare because it is linked to the survival of members of the party. If the party remains unattractive because it is not in the position to help its members, if a party is unattractive because you, who are members of the governing party can’t take care of yourselves or can’t be assisted to take care of members of the party and others, it is difficult to sustain the party. It is important that we see ourselves as selfless; selflessly to build our party, selflessly for the welfare of the people”.