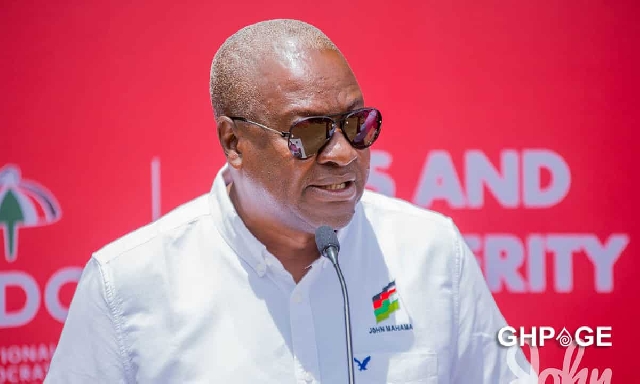 Former President John Mahama has said some 5,000 illegal Chinese miners were deported during his term of office despite the cordial relations between Ghana and China.

Speaking on the illegal mining menace and the neck-deep involvement of the Chinese, Mr Mahama said: “When I was president, we valued the relations with China but if you are a Ghanaian and you go to China and you engage in illegality, they don’t say because of the good relation they have with Ghana, they are going to let you go scot-free”.

“You are going to face the full rigours of the law in China and I don’t doubt that there are some of our citizens in jail in China”, he told Accra-based TV3 in an interview on Monday, 12 September 2022.

He recalled: “When I became President I was faced with this same illegal gold-mining”.

“I deported almost 5,000 illegal Chinese miners. I didn’t say because of the good relation we have with China, we should allow them to continue to engage in illicit activities and we collaborated with the Chinese Embassies, they got 747s and they came and took their nationals away.

President Nana Addo Dankwa Akufo-Addo recently stated that the Attorney General and Minister for Justice, Mr Godfred Yeboah Dame, has his full support to prosecute Ms Huang and other persons found to be engaging in illegal mining in the country.

Speaking at the 2022 Bar Conference of the Ghana Bar Association on Monday, 12 September 2022, President Akufo-Addo assured the members “of my full support to the Attorney General in his determination to prosecute Aisha Huang and her collaborators, who, apparently, insist on flouting our laws against galamsey and illegal mining.”

The President continued, “I expect, if they are found guilty, that the courts will apply the full vigour of the new amended Act 995, which has increased substantially, the punishment for breaches of the law.”

Aisha Huang was arrested and deported for engaging in illegal mining in 2018 but has returned to the country to engage in the same crime that led to her deportation.

She was re-arrested recently and facing two charges of mining without a licence and engaging in the sale and purchase of minerals without a valid licence.

Her arrest has sent social media agog as people wonder how she gained access back into the country.

Some reports suggest she smuggled herself into Ghana through neighbouring Togo and acquired a Ghana card in February 2022 with a new name, Huang En.

Reacting to her latest arrest on the Class Morning Show on Class91.3FM on Wednesday, 7 September 2022, Prof Aning said the best approach to deal with the situation is to probe and discover the Ghanaians who aided her in her illegal work.

“If Aisha Huang is thrown into prison for 10 years and the sub-structure and the super-structures that facilitate organised criminality that enable people like her, to perform, then we have achieved nothing. It will be a loss to this state”, he said.

“So, we shouldn’t rush to put her on trial”, Prof Aning cautioned.

In his view, “We’ve got to allow National Security, with experienced investigators and interrogators, people with forensic capabilities, and I’m talking about financial forensics, to unravel and disentangle the web of corruption, of all kinds of works that allow this kind of business to work”.

“If we rush to put only this woman on trial, we would have done this country a great disservice because we would not have touched the networks who are hidden, who are important players who facilitate the paper works – entry, exit; where is the gold that she has been mining? How does she take it out of the country? Who are those who facilitate it? Does she fly it out? Does she sell it out? Does she drive it out of the country?”

“So, she is just the cover figure of the Ghanaian cartel that backs her, that protects her, that facilitates her work, those are the people we should be looking for”, he noted.

He said: “If Ms Huang is an agent of the Chinese state and that is where we have to go back to the narratives of 2018; why was she allowed to go and what were the explanations that were given at that time?”

When told by the presenter that the government needed $2 billion from the government of China in the Sinohydro deal, Prof Aning said: “Yes, then what it means is that she is not just any ordinary Chinese because just around that time … several other Chinese were arrested before her and also after her”.

“So, prior to and after this arrest, we have been arresting people and we have been dealing with them. So, what is so special about this individual that she was let go? Until we answer these fundamental questions, just supposedly throwing her into jail – and we know that when powerful people are thrown into jail, there’s a luxury pardon – so, for me, if we had not facilitated it or Ghanaians in positions of authority, had not facilitated this, this galamsey menace would not have happened”.

“The theft of rosewood; do you know how many single rosewood trees have been touched in Ghana in the last 10 to 15 years? Six million. Most of them have gone to China. Who are those who facilitated it? And there are documentations to show criminal enterprises within state commissions, who have facilitated this”.