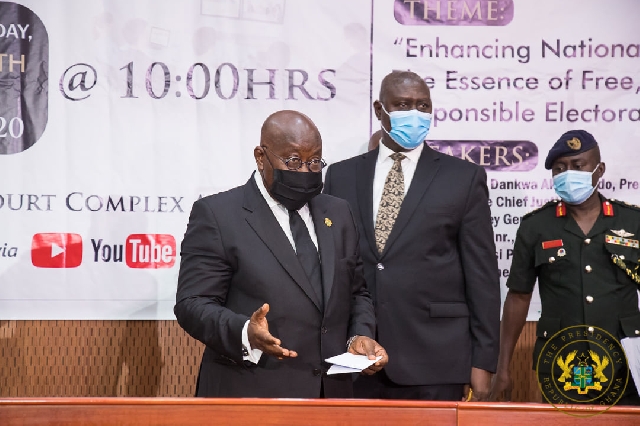 President Nana Akufo-Addo is courting the support of the Ghana Bar Association (GBA) for a peaceful election in the upcoming December polls.

Nana Akufo-Addo said he is committed to the peace of the country before, during and after the elections.

The President said this on Monday, 14 September 2020, when he delivered the keynote address at the virtual Annual Conference of the Ghana Bar Association on the theme: 'Enhancing National Cohesion: The Essence of Free, Fair and Responsible Electoral Process'.

Nana Akufo-Addo said: “Ghana has rightly earned the reputation as the pacesetter in democratic governance on the continent, a reputation I’m determined to uphold and, indeed, enhance prior to, during and after the 7 December election".

"To this end, I will need your cooperation and assistance…”

The President continued: “We have to all worked together to create an environment that will allow the Ghanaian people to make their decision of 7 December in freedom, peace and security - it is their right".

“So, let us, therefore, conduct ourselves with courtesy, responsibility and show respect and peace.

“When my time is up, hopefully after four more years, I want to hand over to my successor and the sovereign people of Ghana, a country that is greater, fairer, stronger, more cohesive, more prosperous and more united than I met it in 2017”.

Over the weekend, the President made a similar pledge to the people of the Ahafo Region where he toured.

Rounding up his two-day tour of the Ahafo Region on Sunday, 13 September 2020, with visits to Hwidiem, Goaso, Dadiesoaba, Mim, Akrodie, Kukuom and Sankore, the President assured residents of the area, particularly in Asutifi South and Asunafo South, that the days of violence in their elections are over.

“For this year’s election, I want everyone to understand that, so long as I am President, irrespective of your party affiliation, anyone who wants to perpetrate violence will have to deal with the laws of our land.

President Akufo-Addo also asked residents of the newly-created region to renew his mandate in the December 2020 elections so his government can consolidate the gains chalked since his assumption of office in January 2017.

The President noted that the Ghanaian people have had an opportunity to witness, at first hand, the impact of the policies and programmes implemented by his government.

The President also urged residents to vote for NPP’s parliamentary candidates, so as to deliver another decisive victory for the people of Ghana.