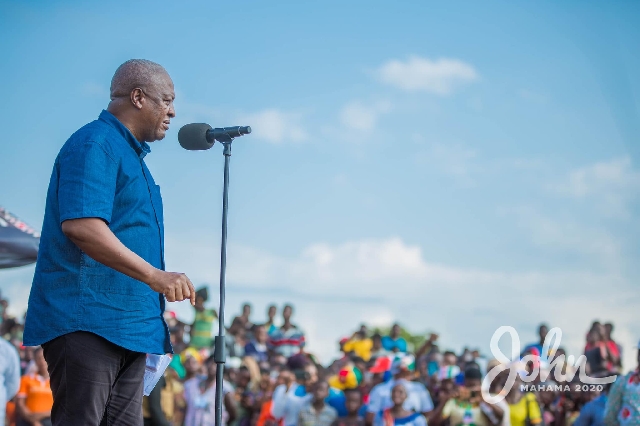 Former President John Mahama has said he has cut short his campaign tour of the Bono Region to return to Accra over several concerns that have been brought to his attention concerning the voter register and the exhibition exercise.

“I am cutting short my tour of the Bono Region to return to Accra because of the increasing reports of challenges with the voter register and the exhibition process”, Mr Mahama wrote on his Face timeline on Tuesday, 22 September 2020.

“We’ll address a major press conference on the issues in due course”, he said.

At the weekend, for example, Ashaiman MP Ernest Norgbey said the Electoral Commission claimed it had restored 14,000 of some 21,000 names that allegedly vanished from the voter roll in his constituency.

He told journalists on Saturday, 19 September 2020 that: “As of yesterday [Friday, 18 September 2020], when the book was opened, about 21,000 names, including mine, could not be found in the new voter register in the Ashaiman Constituency.

“Isn’t that strange?” he wondered.

“One needs not be told that this is an agenda by the Electoral Commission to disenfranchise a lot of people, especially those within areas perceived as strongholds of the NDC”, he alleged.

“This means”, he noted, “that if the anomaly is not rectified, people’s whose names could not be found on the register will not be able to vote in the upcoming elections and only God knows what will befall us should this evil be allowed to triumph”.

The opposition lawmaker, however, announced that after meeting the EC on the matter, two-thirds of the missing names have reappeared.

“Let me quickly say that upon realising the anomaly and having raised the alarm, the Electoral Commission, after a meeting with them this morning, claimed to have, all of a sudden, restored the names of about 14,000 people back into the register”, he said.

“This, we are yet to confirm”, he pointed out.

He said: “The Electoral Commission is saying that they have brought in a new register and that on this new register, we have about 160,000, which means that they have restored 14,000 people and we are yet to confirm to know whether it is true”.

“They actually challenge my figure when I raised the concerns but in less than 24 hours, they have managed to restore about 14,000 names, including mine.

“We are still short of about 7,000 people that should be restored.

“We seek the EC to restore the difference of 7,000 names that is still missing from the register, or else face the wrath of the people of Ashaiman”, he warned.