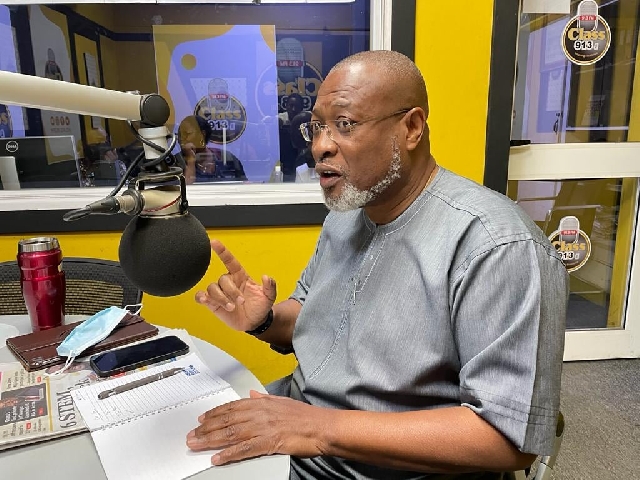 According to him, the 2020 defeat of the National Democratic Congress (NDC) at the general election was the culmination of the NPP’s years of election results manipulation.

“You sit back and you look at what you have and know what’s up and you know you’ve won the election but how do you translate it into the figures that are coming because you’re not the referee and you have to be sure?” he observed.

“So, what happened in 2008 was a manifestation of or the beginning of blatant changing of figures – If I can put it that way”, he told the host.

Explaining what he meant, Mr Segbefia recalled: “We were in the Strong Room and the practice at that time was simple: every constituency faxed us, or from the region; it went to the regions first, the regional offices and they faxed us results from each constituency and then we would be given a copy of it and then we log it into our computers and when we had all agreed it was fine, it was then sent to Afari Gyan [EC Chair at the time], who would check it and then sign it. Once he signs it, that was the official result”.

He continued: “We signed about five sheets that belonged to the Ashanti Region and then later on in the day, another set of sheets came for the very same constituencies that we had already signed off”.

“And, we said: ‘Look, what’s going on? We’ve already signed these off’. They said: ‘No’. So, we went to Afari Gyan and Afari Gyan said: ‘I haven’t got those sheets; I don’t have them’. So, what had happened was: between the transportation of the sheets from the [Strong] Room to Afari Gyan, somebody had intercepted it and stopped those sheets from arriving”, he noted.

“So, all of a sudden, places which were about 40,000 were now 100,000 in the Ashanti Region. So, we were just about to lose an election knowing fully well that the figures were not correct”, he added.

“So, we, immediately, went to Ashanti and said: ‘These particular [constituencies], send us all your pink sheets – while we argued about it –and in each constituency, we got about 90 to 95 per cent of the sheets”.

“So, when we came back … Afari Gyan was quite clear: he said: ‘Look, I must take what I get. And you are talking of a sheet which I’ve never seen, so, I am going with these old figures’. And we said, ‘OK, these are your pink sheets from your agents given to us and this is what we say, add all of them as you have them and then the 5 per cent of the 10, 15 branches that you don’t have, give it all to the NPP’”.

He said Dr Afari Gyan “gave them [New Patriotic Party] all the rest of the [ballots] and then they got to 40,000. So, we used the 40,000 figure. That is how that figure [100,000] dropped because it was clear that the figure had been manipulated in those four, five constituencies and that is how they now had to go to Tain”.

“So, the games didn’t start today and when you don’t know the history, you’ll find what happened … but that’s why we were all a bit concerned about what happened in 2020”, he said.