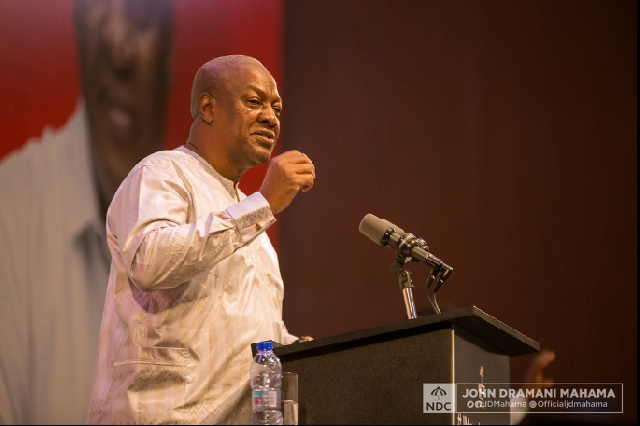 The 2020 Campaign team of former President John Mahama has urged Ghanaians to ignore the “comical” efforts by Vice-President Dr Mahamudu Bawumia to “divert” attention from the important things that matter to Ghanaians, with his recent post on social media in which he adduced 50 reasons to back his claim that President Nana Akufo-Addo has been a better President than Mr Mahama.

A statement issued by the Mahama campaign team signed by spokesperson James Agyenim-Boateng, on Thursday, 30 July 2020, said: “This deliberate and comical attempt by Dr Bawumia to divert attention is as a result of the immense pressure he has come under after paling into insignificance following the selection of Prof Naana Jane Opoku-Agyemang as running mate to Mr John Mahama in the December 2020 elections”.

The Mahama team said: “Prof Opoku-Agyemang’s sterling presentation at Monday’s ceremony in Accra, where she was out-doored as running mate, and her understanding of the challenges confronting our country, as well as her realistic and concrete achievable policy response to some of these challenges have clearly unsettled the Vice-President”.

“While Dr Bawumia prefers to focus on his maligned economic analysis, Prof Opoku-Agyemang has chosen to focus on the critical issues of the economy, which bother on the quality of life of Ghanaians”, the statement added.

Read it in full below:

We have become aware of a Facebook post by Vice-President Mahamudu Bawumia, who is the Chairman of the Government’s Economic Management Team (EMT), which clearly seeks to divert attention from the pressing issues that are engaging Parliament and the people of Ghana in relation to the 2020 Mid-Year Budget Review under section 28 of the Public Financial Management Act, 2016 (Act 921).

This deliberate and comical attempt by Dr Bawumia to divert attention is as a result of the immense pressure he has come under after paling into insignificance following the selection of Prof Naana Jane Opoku-Agyemang as running mate to Mr John Mahama in the December 2020 elections.

Prof Opoku-Agyemang’s sterling presentation at Monday’s ceremony in Accra, where she was out-doored as running mate, and her understanding of the challenges confronting our country, as well as her realistic and concrete achievable policy response to some of these challenges have clearly unsettled the Vice-President.

While Dr Bawumia prefers to focus on his maligned economic analysis, Prof Opoku-Agyemang has chosen to focus on the critical issues of the economy, which bother on the quality of life of Ghanaians.

It is instructive for the Vice-President, who is the head of the EMT, to note that there is a vast difference between economics and the economy. While economics focuses on the vexed matter of indicators, the economy focuses on measures aimed at improving the quality of life of the people, such as reducing child mortality, improving access to quality education, improved healthcare delivery, maternal mortality, creating equal opportunity and sustainable jobs.

It is obvious that this elevated level of political discourse leading into the 2020 election is one that Dr Bawumia is ill-equipped to deal with and he is, therefore, desperately forcing his status quo to remain.

While it is important to digitise and improve the quality of public service delivery, it is not a substitute for the difficult task of building infrastructure and social systems to anchor the development of the country.

There are, therefore, measures to determine the success or otherwise of digitisation and public service improvement.

Ironically, while the Vice-President continues to tout his so-called digitisation agenda, the capacity of the public sector to support the private sector to improve Ghana’s business environment has consistently worsened.

Put simply, Akufo-Addo and Bawumia’s best record on the Ease of Doing Business ranking does not even surpass Mahama’s worst record on that ranking.

Unlike the Ease of Doing Business Report, where the lower the ranking the better it is for a country, the CPI is the reverse, such that the higher the ranking, the better.

A very important principle and objective of digitisation in public service delivery improvement is to eliminate human interference and thereby reduce the opportunities for corruption by public officers.

Therefore, one would have expected that Dr Bawumia’s digitisation agenda would lead to an improvement in Ghana’s CPI rankings.

Sadly, that is not the case.

Here again, the Mahama administration’s worst record of 43 in 2016 on the CPI ranking is better than that of Akufo-Addo’s best record of 41 in 2019.

From the presentation of the 2020 Mid-Year Budget Review by the Minister of Finance and the on-going debate in Parliament, we have made the following observations, which require the urgent attention of the Vice-President and Chairman of the EMT:

1. The people of Ghana want to know how the Akufo-Addo government spent over 11 billion Ghana cedis on COVID-19 without any meaningful improvement in the fight against the spread of the virus. For example, medical doctors, nurses and other health professionals consistently lament the inadequacy of Personal Protective Equipment, leading to some of them needlessly being infected and dying of COVID-19.

2. Ghanaians want to know how the government spent 54.3 million Ghana cedis on food packages in less than 3 weeks of lockdown in selected parts of the country, especially when many vulnerable people say that they did not benefit.

3. The government has failed to explain to Ghanaians how it provided ‘parallel fiscal numbers’ to the International Monetary Fund (IMF) and the World Bank;

• in December 2019 (as part of the Article IV consultations), which differed from what the Minister of Finance was requesting Parliament to approve at the time; and

• in March and May 2020 when the government presented the same ‘parallel fiscal numbers’ simultaneously to Parliament and the IMF negotiating team at the time the government applied for the US$1 billion COVID-19 Rapid Credit Facility (RCF), which represents 100% of Ghana’s allowable quota for borrowing from the Fund.

4. It is important to point out that borrowing to the limit of Ghana’s 100% quota from the IMF implies that Ghana has hit its borrowing limit with the Fund, at least for the time being.

6. That the disparity in these ‘parallel fiscal numbers’ from 2017 to 2020 between the Government of Ghana and the IMF are the results of consistently treating the energy sector arrears and the banking sector bail out costs as footnotes in the appendices to the budgets (or not showing them at all as in 2017 and 2020).

7. The 2020 Mid-Year Budget Review shows that the increase in the projected budget deficit from 4.7% to an estimated 14% includes only 2.5% of COVID-19 expenditure. Therefore, the substantial increase relates to non-COVID expenditure, which the government has failed to explain.

8. By not making the distinction between COVID-19 and non-COVID-19 expenditure in the Mid-Year Budget Review, the Akufo-Addo government is simply deceiving Ghanaians that all the exponential budget deficit, loans and expenditure for 2020 are attributable to COVID-19.

This is most unfortunate because the government is simply using COVID-19 to cover up its reckless management of the huge taxes and loans.

It is regrettable that at this juncture, the reputation of Ghana is at stake, particularly as global institutions such as the World Bank, Fitch, Moody’s and Economic Intelligence Unit (EIU) have all made disclosures, which are consistent with the IMF’s revision.

Dr Bawuima’s Facebook post is just an attempt to distract public attention from the very woeful economic performance that has been exhibited by the Akufo-Addo government in the 2020 Mid-Year Budget Review.

It is even more shocking to observe that at a time when the nation is confronted by such serious economic issues, which have forced the government to borrow to its very quota limit from the IMF, Dr Bawumia would still have some spare time to take to social media to engage in his trade mark comical, frivolous, ludicrous, outrageous and diversionary antics.

Finally, the point must be emphasised that when the story of the Akufo-Addo government is told, it will be a litany of lies, falsehood, deceit, dishonesty and manipulation of figures under the auspices of Dr Bawumia as Chairman of the EMT.