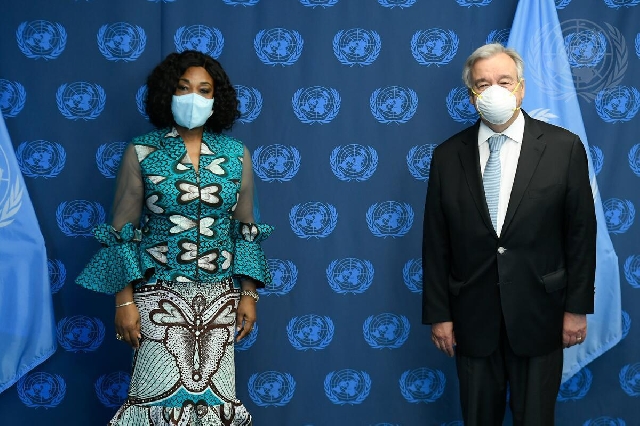 During the meeting, the minister discussed with the Secretary-General, Ghana’s vision and priorities for her tenure as a prospective non-permanent member of the United Nations Security Council, as well as exchange views on pertinent global security challenges, including the situation in the Sahel, particularly Mali.

She also explained that in furtherance to Ghana’s commitment to enhancing global peace and security, the country is seeking, for the fourth time, a non-permanent membership of the Security Council for the period 2022-2023.

Ms Botchwey expressed hope that Ghana will be elected on 11 June 2021 and has adopted as the theme for her agenda on the Security Council – ‘Enhancing Global Peace and Security for Sustainable and Inclusive Development’ while emphasising the nexus between peace and security, and sustainable and inclusive development, particularly on the continent of Africa.

The minister also advocated the need to strengthen the close alignment of the work of the United Nations in those two areas in order to assure a reinforcing effect.

She mentioned that Ghana intends to leverage her previous and current experience as the Chair of ECOWAS and an active member of the AU to prioritise issues of conflict prevention, post-conflict reconstruction, and the strengthening of partnerships between the UN and regional arrangements in dealing with conflict situations.

Commenting on regional security issues, the minister seized the opportunity to brief the Secretary-General on efforts being undertaken by ECOWAS to address the security situation in the Sahel and the need to have a sustained and comprehensive approach to dealing with the situation.

She stated that the current deterioration of the situation in Mali was most unfortunate and a setback to the efforts of the international community and the region to restore democracy and rule of law in that country and consolidate the internal military capacity of Mali in the regional fight against extremists and terrorists on the fringes of the Sahel.

She further explained factors accounting for the suspension of Mali from ECOWAS Institutions in line with ECOWAS provisions and called for a new civilian Prime Minister to be nominated immediately, while indicating that Ghana is troubled by the growing spate of insecurity in the West Africa region in recent times, manifesting in terrorist attacks, political instability, maritime piracy.

She, however, assured the Secretary-General of Ghana’s continuous commitment to promoting multilateralism as the best means of achieving a safer, peaceful and prosperous world.

For his part the United Nations Secretary-General, Antonio Guterres applauded the President of Ghana Nana Akufo-Addo, as the chair of ECOWAS for his efforts at mediation to resolve the crises in Mali while affirming that ECOWAS, under the chairmanship of the president of Ghana, had taken the right approach with addressing the conflict in Mali and further emphasized that an all-inclusive Government in Mali should be the target for approaching steps to lasting peace.

The Secretary-General also indicated that there was a need for solidarity among nations to address the COVID-19 pandemic and acknowledged Ghana’s efforts at calling on the international community to address the financing gap as far as COVID is concerned.