Delayed return of fans is 'devastating' 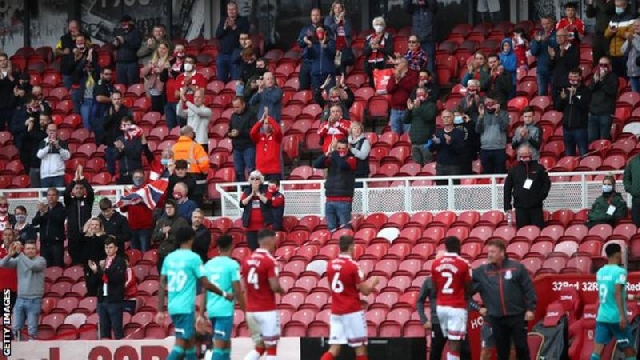 Middlesbrough hosted 1,000 socially-distanced fans in their Championship match against Bournemouth on 19 September

The postponement of plans for fans to return to sporting events in England may lead to the "devastating impact" of football clubs folding, says Tranmere Rovers vice-chair Nicola Palios.

Prime Minister Boris Johnson said on Tuesday plans for some fans to return from 1 October will not go ahead.

The Premier League said it was "disappointed" by the announcement.

It added that "the football economy is unsustainable" without fans attending matches.

Palios told BBC Sport "the impact could be quite devastating" for many clubs throughout the English football league system.

"A lot of clubs were already having financial difficulties before this pandemic started and this may sadly tip some of them over the edge," she said.

Culture secretary Oliver Dowden will meet representatives of the major sports later on Tuesday to discuss the decision to call off the plans and talk about the request for a sports recovery fund.

The proposals were placed under review earlier this month after a rise in coronavirus cases. Pilot events in September had already been restricted to 1,000 people, but the pilot programme will now also be paused.

Palios said League Two side Tranmere were "lucky" to be "better off than most" but had had to spend money put aside for capital projects on "staying afloat" instead.

"If a rescue fund isn't forthcoming you'll see a devastating impact in terms of loss of clubs and job losses," she added.

"It's not just job losses within the clubs themselves, it's all the other businesses in the local area that are supported by them and survive because of them.

"We've already seen Macclesfield disappear and I fear there are more to follow if the rescue package isn't forthcoming.

"The full return of fans is the key thing as playing in front of 1,000 or 3,000 fans is actually more costly for the clubs than playing behind closed doors, certainly for those clubs who have sold season tickets for the current season."

Macclesfield Town, who were relegated from the English Football League (EFL) at the end of the 2019-20 season, were wound up in the High Court over debts totalling more than £500,000 last week.

Johnson outlined the new measures after the UK's Covid-19 alert level moved to 4, meaning transmission is "high or rising exponentially".

Speaking to BBC Breakfast, cabinet office minister Michael Gove announced the government were pausing the staged programme of fans returning but wanted to "make sure that, as and when circumstances allow, we get more people back".

Football is not the same without fans - Premier League

The Premier League said its clubs suffered £700m in losses last season and the national game is currently losing "more than £100m per month" without fans present.

"This is starting to have a devastating impact on clubs and their communities," it added.

"Football is not the same without attending fans and the football economy is unsustainable without them."

The top flight said it was certain the code of conduct it has developed means "fans in stadiums will be as safe or even safer than at any other public activity currently permitted" and this is "already evident" in other European league such as Germany's Bundesliga.

It said Premier League clubs "using innovative ways to get supporters safely back into grounds, will enable revenues to return to all levels of the game" and that they "will not slow down" in their "preparations for providing safe, bio-secure environments".

Burnley manager Sean Dyche said the Premier League may "step in" if they could "enhance the chances" of lower league teams surviving but that it was unfair to just single out football.

"If you are going to apply it to football, you have to apply it across the country to everyone and every business."

Newcastle boss Steve Bruce said the delay was "disappointing" and that football is "totally and utterly different" without fans.

"If we ever thought that it's not a game for the supporters any more, then we just have to witness what we have witnessed over the last three or four months," he said.

"It's not the spectacle that I believe it is."

We had no idea this was coming - Chesterfield

Chesterfield chief executive John Croot said the National League side had "no idea" the "bombshell" of Gove's announcement was coming and the club had to suspend ticket sales that were due to start on Tuesday morning.

"I played it back to check I heard it correctly - nobody in the club had any idea that bombshell was coming our way," Croot told BBC Radio Sheffield.

"The National League has told us they have no real information at the moment, they are trying to find out themselves.

"It's a financial worry and football is not football without fans. It affects everything, if the fans aren't coming through the door it affects finances, it affects sponsors.

"We are OK for the time being but speaking to other clubs, there are a number of clubs who are weeks away from real issues."

Fans are crucial to clubs' survival - the supporters' view

Football Supporters' Association chief executive Kevin Miles said the organisation has written to the government to "stress how important it is that we start to allow fans back into games".

"Feedback from our members at test events has confirmed high levels of compliance with all the health and safety measures put in place, and that they felt safer at games than they have done in many other social situations," said Miles.

"Having fans at games is of course not only important to the lives of supporters, it is also crucial to the survival of so many clubs who play a crucial role within their communities. A combination of revenue at the ground and government support is urgently needed to keep clubs going."

Gloucester Rugby Club chief executive Lance Bradley said the announcement was "disappointing" after the "success" of a pilot event where 1,000 fans watched the club's Premiership defeat by Harlequins at Kingsholm on 14 September.

Gloucester's Premiership game at Bath on Tuesday will now take place behind closed doors after the pilot scheme was paused.

"We took very detailed measures in conjunction with the relevant authorities to make sure people were socially distanced while they were there and we feel the event was a success," Bradley told BBC Radio 5 Live.

"It is vital to us that we get fans back in as quickly as it's safe to do so - matchday income from fans makes up about a third of our total income so it's a significant part.

"We absolutely do need to try to get some fans back in before Christmas and there are some trials, we are talking to a company that are developing a quick testing mechanism that might allow us to get fans in more quickly than that and it is very important we work with the government to try to achieve that."