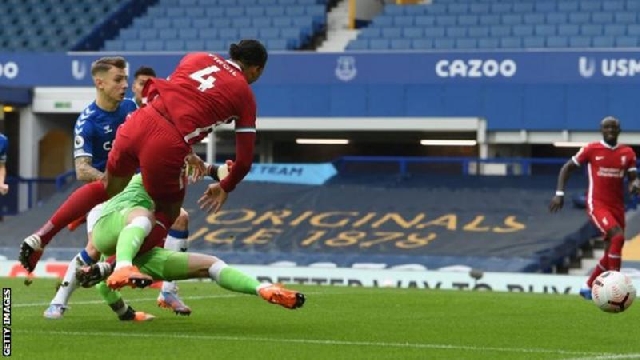 Virgil van Dijk was injured in a challenge by Jordan Pickford

Everton came from behind twice to maintain their unbeaten start to the Premier League in a Merseyside derby thriller as Liverpool were denied a stoppage-time winner by the video assistant referee.

Sadio Mane put the visitors ahead in the third minute but they were furious soon afterwards when a wild challenge by Everton keeper Jordan Pickford on Virgil van Dijk, committed after an offside decision, saw the defender having to go off injured with VAR failing to review the tackle.

Everton, who had won their previous seven games in all competitions, equalised swiftly at Goodison Park when Michael Keane headed in a corner from the outstanding James Rodriguez.

Liverpool, with Thiago Alcantara at the heart of everything, were back in front with 18 minutes left when Mohamed Salah volleyed in Yerry Mina's poor clearance to set up a frantic finale, with only Pickford's magnificent save from Joel Matip's header keeping Everton in the hunt.

Dominic Calvert-Lewin's towering header restored parity with nine minutes left but Everton were then reduced to 10 men when Richarlison was sent off for a wild challenge on Thiago.

Liverpool thought they had won it in stoppage time when Pickford could not keep out Jordan Henderson's shot - but in a finish to match the chaotic nature of the game, Mane was adjudged to be offside after a lengthy wait for the VAR decision.

Everton and England keeper Pickford has been unable to stay out of the headlines this season as the spotlight has fallen on his faltering form - and he was the central figure in this eventful Merseyside derby.

When Everton were 1-0 down, he somehow escaped a red card for a challenge on Van Dijk that was dangerous enough to force Liverpool's defender off, with the Dutchman looking in much discomfort as he made his way around the pitch.

He was then in more traditional action as he made a fine save from Trent-Alexander Arnold's free-kick and then - with Liverpool no doubt feeling he should not even be on the pitch - he made a world-class save diving away to his right to keep out Matip's header when it looked a certain goal with the score 2-1 in favour of Jurgen Klopp's side.

Even then his afternoon was not over as he scrambled back in vain after failing to hold Henderson's shot - the relief clear when VAR ruled out the goal.

Everton may still not have beaten their great rivals in a decade but Carlo Ancelotti's side will take great comfort from the manner in which they fought back twice and while Liverpool were the more consistent threat, there is a serious menace about this team that was not present last season.

Thiago brings class to the chaos

Liverpool's Thiago and Everton's Rodriguez sailed serenely above the chaos in this match, showing the time and class that simply did not seem to be available to others.

In Thiago, Liverpool have added a midfield controller to the side that won the Premier League at a canter last season.

He was composed and some of his picked passes were of the highest standard, looking an absolute snip at £20m from Bayern Munich.

Salah's unforgiving finishing was on show once again, scoring his 100th goal for the club, and Liverpool will feel disappointed they could not close out the victory after leading so late on.

They mounted an expected recovery from that 7-2 thrashing at Aston Villa but they have now dropped five points in their past two away games and - even allowing for Van Dijk's early injury - do not look as impregnable as they did last season.

Klopp will hope Van Dijk's injury is not serious as, perhaps helped by the manner in which Leeds United troubled Liverpool on the opening weekend and that humiliation at Villa, there is a belief in opponents that they can be got at.

'We were dominant against a flying side'

"We were dominant against a flying side. Different things happened today. This type of offside I didn't see in the Virgil and Pickford incident.

On the Henderson ruled-out goal: "I don't know where the line is where you can do offside.

"Yes, we should have won this game. The boys played a super game. against a side with quality and confidence. Dominating from the first second is absolutely exceptional."

Everton goalscorer Dominic Calvert-Lewin: "As you'd expect in derbies, got tackles flying in 50-50, so there's always a chance the ref might bring out a yellow or red.

"Disappointed we didn't kick on at 1-1. We knew we would have spells where we wouldn't have the ball. I managed to put one away but I genuinely thought it would be coming [the win], but it wasn't to be.

"I'm disappointed we didn't win the game. In that respect it was frustrating. In terms of the bigger picture, it's a point and we'll take it."

The stats - the red card derby Liverpool are unbeaten in their past 23 meetings against Everton in all competitions, their longest run against a single opponent in history. Everton haven't led in any of their past 14 Premier League matches against Liverpool - only Crystal Palace have had a longer run against an opponent without going ahead in the competition (17 v Manchester United between 1992-2017). Everton v Liverpool has seen more red cards than any other fixture in Premier League history (22), with Everton's 15 in this fixture also a record for one side against another. Liverpool have conceded 13 goals in their five Premier League games this season - they conceded as many after 15 games last term. Thirteen goals is the most Liverpool have shipped after five league games since 1953-54 (also 13). Mohamed Salah's goal was his 100th for Liverpool in all competitions, in his 159th game for the club - only Roger Hunt (144) and Jack Parkinson (153) have reached the milestone in fewer appearances for the Reds. Dominic Calvert-Lewin is the first player to score in each of Everton's first five league games in a season since Tommy Lawton in 1938-39. Calvert-Lewin is just the fourth player to score in each of his side's first five Premier League games in a season, after Arsenal's Jose Antonio Reyes (2004-05), Manchester United's Wayne Rooney (2011-12) and Manchester City's Sergio Aguero (2019-20). Sadio Mane's goal after two minutes and 15 seconds was Liverpool's fastest goal in a Premier League Merseyside derby, while it was the second quickest goal overall in this fixture in the competition (Olivier Dacourt for Everton, one minute in April 1999). What's next?