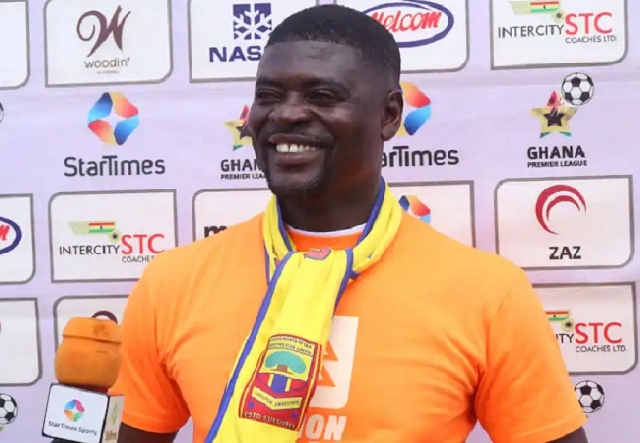 Head Coach of Accra Hearts of Oak, Samuel Boadu has said he still has confidence in his side after Sunday's 0-2 defeat to Asante Gold at the Len Clay stadium.

The Rainbow boys are yet to find their first premier league win this season after drawing in all opening three games against Legon Cities, WAFA and Aduana stars before recording their first league defeat to Asante Gold last Sunday.

Hearts are yet to win a league match game at home since beating rivals, Asante Kotoko on June 27th in Accra.

Despite the team struggling to find its feet in the league, Coach Boadu said he is not demoralised as the confidence he has in his team remains unmatched.

The gaffer said he knows what has to be done in order to push forward in the league.

"We're still confident, I have confidence in my boys and I know we can push harder and do what it takes to be good for the Hearts of Oak fans," he said.

The Ghana Premier league champions, are left with only three points out of a possible 12 maximum point after game week four and are 15th on the premier league table.

Hearts of Oak are nine points apart from league leaders and rivals, Asante Kotoko who have had a 100 percent winning record this season.

The Phobians will be in action on Sunday at the Accra sports stadium as they take on Algerian side JS Saoura in the first league of the 2021/2022 CAF Confederation Cup play-offs.

Hearts were thrown out of the CAF champions league play-offs by Wydad AC in a 6-1 defeat and henceforth will be competing in the CAF Confederation Cup.