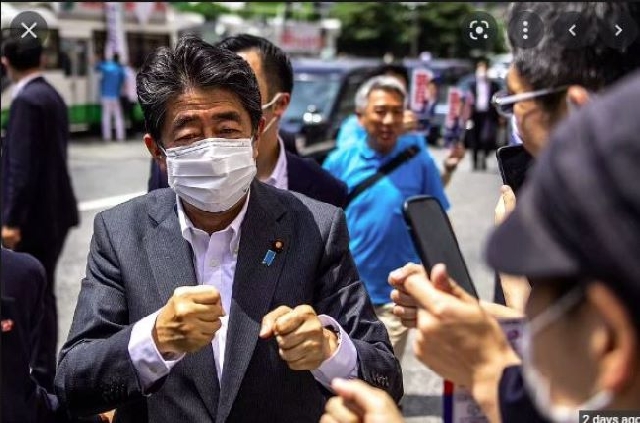 A top police official has admitted that security lapses did allow an assassin to get close behind and fire his gun at former Japanese Prime Minister Shinzo Abe while he was addressing a campaign rally.

Abe was shot in the western city of Nara on Friday and airlifted to a hospital but died of blood loss. Police arrested the attacker, a former member of Japan's navy, at the scene. Police confiscated his homemade gun and several others were later found at his apartment.

The attacker, Tetsuya Yamagami, told investigators he acted because he believed rumors that Abe was connected to an organization that he resents, police said. Japanese media reported that the man had developed hatred toward a religious group that his mother was obsessed about and that caused his family financial problems. The reports did not specify the group.

'I cannot deny there were problems with our security,' Onizuka said. 'Whether it was a setup, emergency response, or ability of individuals, we still have to find out. Overall, there was a problem and we will review it from every perspective.'

Abe's assassination ahead of Sunday's parliamentary election shocked the nation and raised questions over whether security for the former prime minister was adequate.

Some observers who watched videos of the attack noted a lack of attention in the open space behind Abe as he spoke.

A former Kyoto prefectural police investigator, Fumikazu Higuchi, said the footage suggested security was sparse at the event and insufficient for a former prime minister.

'It is necessary to investigate why security allowed Yamagami to freely move and go behind Mr. Abe,' Higuchi told a Nippon TV talk show.

Experts also said Abe was more vulnerable standing on the ground level, instead of atop a campaign vehicle, which is usually the case but was reportedly unavailable due to his hastily arranged visit to Nara.

'Looks like police were mainly focusing on frontward, while paying little attention to what's behind Mr. Abe, and nobody stopped the suspect approaching him,' said Mitsuru Fukuda, a crisis management professor at Nihon University. 'Clearly there were problems.'

Fukuda said that election campaigns provide a chance for voters and politicians to interact because 'political terrorism' was extremely rare in post-war Japan. But Abe's assassination could prompt stricter security at crowded events like campaigns, sports games and others.

On Saturday, a black hearse carrying Abe's body and accompanied by his wife, Akie, arrived at his home in Tokyo's upscale residential area of Shibuya.

Many mourners, including top party officials, waited for his remains and lowered their heads as the vehicle passed.

His wife Akie lowered her head as the hearse left the hospital for the couple's home in Tokyo.

As a hearse carrying Abe's body arrived at his residence in Tokyo, members of his ruling Liberal Democratic Party (LDP), dressed in black, lined up to pay their respects.

Men and women were pictured weeping and praying next to flowers at a site outside of Yamato-Saidaiji Station in Nara, where Abe was shot.

Local media reports suggest a night vigil will be held on Monday and Abe's funeral is due to take place on Tuesday.

Mr Abe, 67, who was Japan's longest-serving leader when he resigned in 2020, collapsed bleeding and was airlifted to a nearby hospital in Nara, although he was not breathing and his heart had stopped.

Police at the shooting scene arrested Tetsuya Yamagami, 41, a former member of Japan's navy, on suspicion of murder.

Police said he used a gun that was obviously homemade - about 40cm long - and they confiscated his personal computer when they raided his nearby home.

Yamagami had amassed an arsenal of home-made weapons similar to the one used in the attack at his home, along with a number of explosives which have been taken to be destroyed, police say.

It is not clear exactly how he learned to make the weapons, but he is a veteran of the country's defence forces, having served in the navy between 2002 and 2005.

Yamagami is currently unemployed and had travelled to Nara by train, lying in wait at the station where Mr Abe was due to give his speech before launching the attack. Cops have not said how long he waited.

A chilling image taken just moments before Abe was killed shows Yamagami - an unassuming figure in a green t-shirt and cargo trousers - loitering just behind him.

Yamagami was responding calmly to questions and had admitted attacking Mr Abe, police said, and he had told investigators he had plotted to kill him because he believed rumours about the former leader's connection to a certain organisation - which police did not identify.

Dramatic video from broadcaster NHK showed Mr Abe standing and giving a speech outside a train station ahead of Sunday's parliamentary election.

As he raised his fist to make a point, two gunshots rang out and he collapsed holding his chest, his shirt smeared with blood as security guards ran towards him.

Guards then leapt on to the gunman, who was face down on the pavement, and a double-barrelled weapon was seen nearby.

Prime Minister Fumio Kishida and his Cabinet ministers hastily returned to Tokyo from campaign events elsewhere after the shooting, which he called 'dastardly and barbaric'.

Mr Kishida pledged the election, which chooses members of Japan's less-powerful upper house of parliament, will go on as planned.