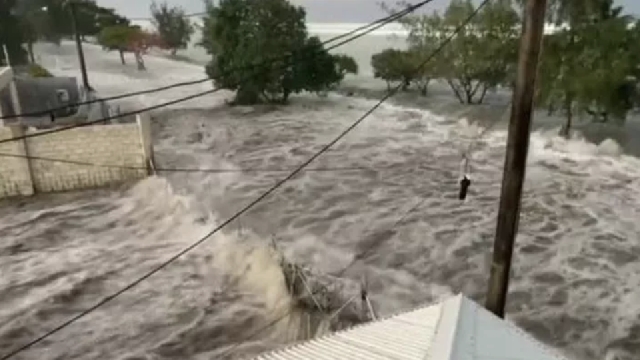 Tonga says it has been hit by an "unprecedented disaster", in the government's first update since a volcanic eruption triggered a tsunami.

In a statement, the government confirmed three deaths: two locals and a British national.

It said some of the smaller, outlying islands were particularly badly affected, with all the houses destroyed on one and just two left on another.

Aid efforts have been hampered by ash falling from the volcano.

Volunteers have been sweeping the runway of the main airport to allow planes bringing much-needed drinking water and supplies to land.

Communications with the island chain have been disrupted after the single underwater cable connecting Tonga to the rest of the world was severed in the eruption.

In its update, the Tongan government said the internet was down, but some local phone services were available and work was underway to restore full communications.

A 65-year-old woman, a 49-year-old man and British woman Angela Glover were killed in the tsunami.

Dozens of houses on the main island of Tongatapu were also damaged.

Evacuations from the worst-hit islands are underway.

Water supplies have been "seriously affected" by the volcanic ash.

Flights have been temporarily halted and sea transport routes are disrupted.