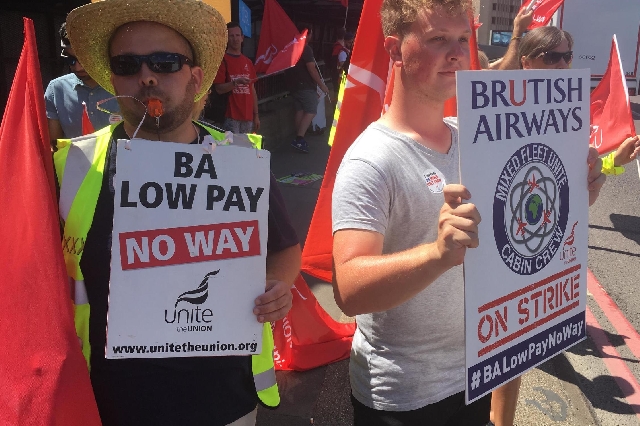 The carrier's cabin crew and ground staff have voted overwhelmingly for industrial action, with 97 per cent of those polled voting in favour.

The survey - the latest sign of unrest at the beleaguered carrier - doesn't authorise strike action, which can only be approved by a formal vote.

However, with hundreds of BA flights taking off every week, any disruption would cause mass chaos.

The vote result is "no surprise," said a spokesperson for Unite, the union representing 16,000 BA workers.

"To anyone that has flown on British Airways recently, this overwhelming consultative ballot result will come as no surprise," they said.

“British Airways’ management now can no longer ignore the universal discontent across their own workforce, in the way they have ignored the needs of their own customers.”

The ballot is a worrying development for the airline, which was recently forced to cancel 8,000 flights in its March-October schedule.

On top of this, 15 to 20 per cent of BA travellers on cancelled flights still won’t be at their destination 24 hours after they were meant to arrive.

So how did things get so bad - and is the end in sight?

How many flights has British Airways cancelled?

British Airways has had a difficult couple of months.

Under short-staffing pressure, the airline announced last month that it had reduced its schedule by 10 per cent - around 8,000 round trips - between March and October.

The carrier insisted that customers would be notified of these pre-planned cancellations in advance, and would be entitled to seats on other flights.

If the cancellation was announced less than a fortnight in advance, passengers are also entitled to financial compensation.

But social media is nonetheless full of BA customers venting their anger.

“It’s shocking that you can just ruin someone's holiday that they’ve worked hard to save for by sending a text 12 hours before departure! BA should be ashamed of itself,” social media user Michael posted.

Other customers complained about being kicked off flights at the very last minute.

“Just got to Heathrow Airport to be told by @British_Airways they’ve overbooked our flight and we can’t fly. How do they allow this to happen?!!”

A BA spokesperson conceded that recent weeks have been “challenging for the entire industry.”

“At British Airways we're completely focused on three priorities: our customers, supporting the biggest recruitment drive in our history and increasing our operational resilience,” they said.

“We've taken action to reduce our schedule to help provide certainty for our customers and are giving them maximum flexibility to either rebook with us or another airline as close to their original departure time as possible, or to receive a full refund.” © Provided by Euronews The entire aviation industry is suffering from staff shortages Canva / Travellinglight How did things get so bad - and will it get worse?

The global aviation industry has cut an estimated four million jobs since the start of the pandemic.

When COVID grounded almost all of its planes, BA axed 10,000 jobs. So now, as the world reopens, the flagship carrier has to ramp up from 30 per cent capacity to 80 per cent capacity - with a vastly reduced team, and a critical shortage of baggage handlers. It’s also facing record numbers of absenteeism due to COVID cases.

The chaos has hit BA where it hurts - the pocketbook. First-quarter operating losses were €754 million, far worse than analyst forecasts of €510 million.

Faced with a difficult profit margin and angry customers, BA is scrambling to resume normal service.

How is BA planning to fix the problems?

The carrier plans to hire 6,000 staff this year. There’s no shortage of applicants - more than 20,000 people have applied for a job at the airline - but the hiring process is slow due to government-mandated security vetting procedures.

In order to “bypass British red tape” BA plans to open a crew base at Madrid Barajas airport.

It has also borrowed aircraft and crew from its Oneworld partner Finnair to try to stabilise its schedules over the summer.

But the possibility of striking staff could throw these recovery plans into chaos.

Will BA staff strike this summer?

The GMB and Unite unions - which represent thousands of BA workers - said members were “furious because a 10 per cent pay cut imposed on them during the pandemic has not been reinstated”.

“Under the cover of COVID, British Airways used the abhorrent fire and rehire practice to slash check-in and ground handlers’ pay by 10 per cent,” said Sharon Graham, Unite general secretary.

“In a further disgraceful move, BA has now restored the pay of managers but has kept the cut for these workers." Sharon Graham Unite general secretary.

GMB union representatives warned that the industrial action could “trash many people’s summer holidays” if it goes ahead, urging BA to hike worker pay.

“This isn’t a ballot for industrial action, and while not surprising given the issues across the transport sector, it’s disappointing," a spokesperson said.

“After a deeply difficult two years which saw the business lose more than £4 billion, we still offered payment to our colleagues for this year. We remain committed to open and honest talks with our trade unions about their concerns.”

Strike or no, travellers are gearing up for a summer of winding queues and long delays.

According to Airline Council International modelling, delays and cancellations are inevitable at two thirds of European airports this summer.