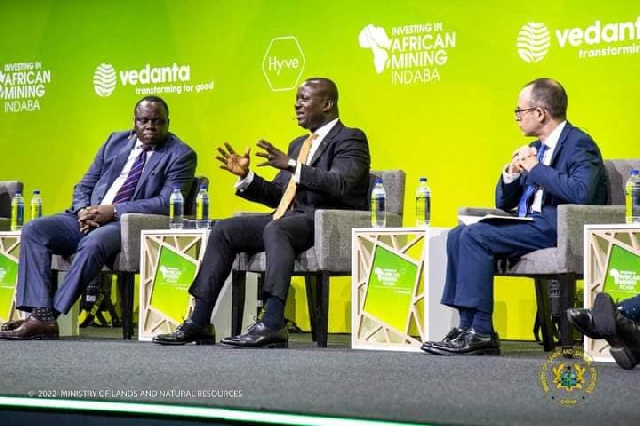 The Minister of Lands and Natural Resources, Mr Samuel A. Jinapor, ahs said there must be a careful balance between ensuring that citizens get the maximum benefits from their resources and attracting the needed capital and technology for the effective exploitation of the resources.

Contributing to a panel discussion on ‘Resource Nationalism’ at the ongoing “African Mining Indaba” conference in Cape Town, South Africa, Samuel A. Jinapor stressed that striking the right balance between the aforementioned issues will resolve the headache of resource nationalism.

Shedding light on the approach and tactics adopted by Ghana to create the enabling environment in the mining sector, Mr Jinapor stated that the democratic principles which the nation upholds serve as the bedrock for investment in her resources.

He further underscored Ghana's political stability as one of the best in the world, saying that "the rule of law is not an exception, is the law, democratic accountability is ingrained in the Ghanaian society".

The Lands Minister said the framework for the mining sector in Ghana is cast out clearly and indicated that, for potential investors who want to do business with the government of Ghana, they should be certain that the sanctity of contractual agreements is the norm and not the exception, adding that government will respect and comply with contractual agreements.

"If an investor were to come into Ghana, he knows the local content laws clearly, he knows the physical framework we work with in the country clearly and the regulatory framework so the rules don't change in the middle of the game," he said.

Speaking on the topic; The Resource Nationalism Challenge: How has the Global Pandemic shaped sovereign state views on resource nationalism and collaboration, Mr Jinapor said the issue of value sharing and Mining impacting on the livelihoods of populations have to be looked at dispassionately as poverty, COVID- 19 and other occurrences have made these impact almost impossible to be realized by the indigenes of mining nations.

He stated emphatically that the matter can be considered from two viewpoints, explaining that "countries must be mindful of the kind of arrangements we get into with investors and Mining companies regarding negotiations, capabilities and integrity of these companies"

He continued by saying: "Having done that negotiations and gotten into contracts and the train having taken off, how the proceeds of those transactions are utilised is another critical point that I believe States, in particular, ought to be interrogating"

The Lands Minister charged that Africa must rise and be truthful to herself as governments and countries have not done well on both sides historically. "We haven't negotiated properly; we haven't built the capacity which is extremely important when it comes to getting properly negotiated agreements"

Mr Jinapor submitted to the panel the strategy Ghana has employed on the issue of resources nationalism on mining saying " we in Ghana have adopted the multilateral approach to dealing with issues on Mining so we do not use the unilateral approach and by this, whatever measure, intervention or policy we put in place, we make sure that we engage the mining communities and players"

He added that through the expertise and capacity of the Ghana Chamber of Mines, which is the umbrella body of almost all the major mining companies in Ghana, the government is able to push its interventions through.

He disclosed that the Akufo-Addo government has rolled out a strategic programme being implemented by his Ministry which he believes will result in a major paradigm shift in the regulation and operation of the Ghanaian mining industry.

"We have a short to medium to long term programme which will ensure that we add value to these minerals, ensuring that the whole value chain from exploration to the downstream industry is retained in Ghana.

He added that other special institutional arrangements such as the Minerals Development Fund (MDF) have also been put in place to ensure that 20% of the mining royalties is invested in the development of Mining Communities in Ghana.

The Sector Minister pointed out forcefully that "in the end, be it corruption, be it negotiations, be it the sanctity of contracts and the respect for investments, all boils down to the policy and legislative framework"

"At the heart of this matter of resource nationalism, preventing it and also ensuring that the State gets its share of the resource is to make sure that you have the framework which makes matters certain" He concluded.