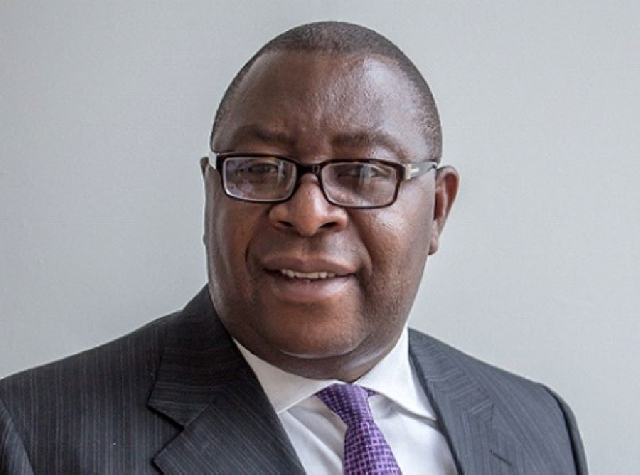 The Receiver of 347 defunct microfinance companies, Mr Eric Nana Nipah, will from today, Monday, 13 July 2020, meet with representatives of ex-staff of the affected companies to agree on modalities for the payment of outstanding salaries and their exit packages.

“To ameliorate the economic impact of the resolution exercise on former employees of these affected companies, particularly in these times of COVID, the Bank of Ghana has agreed to pre-finance the full settlement of employee-related claims, which, otherwise, rank as unsecured claims in the receiverships of these companies,” a statement from the receiver said.

“The Receiver will, in the week commencing Monday, 13 July 2020, engage with the authorised representatives of the ex-staff to agree on modalities for the payment of outstanding salaries and exit packages to ex-staff of these resolved institutions,” the statement said.

Mr Nipah further noted that he will only fully settle outstanding salaries and exit packages of former employees which have been duly-validated, agreed and in the resolution process.

In May 2019, the Bank of Ghana announced the revocation of the licences of 347 microfinance companies in the country for insolvency. 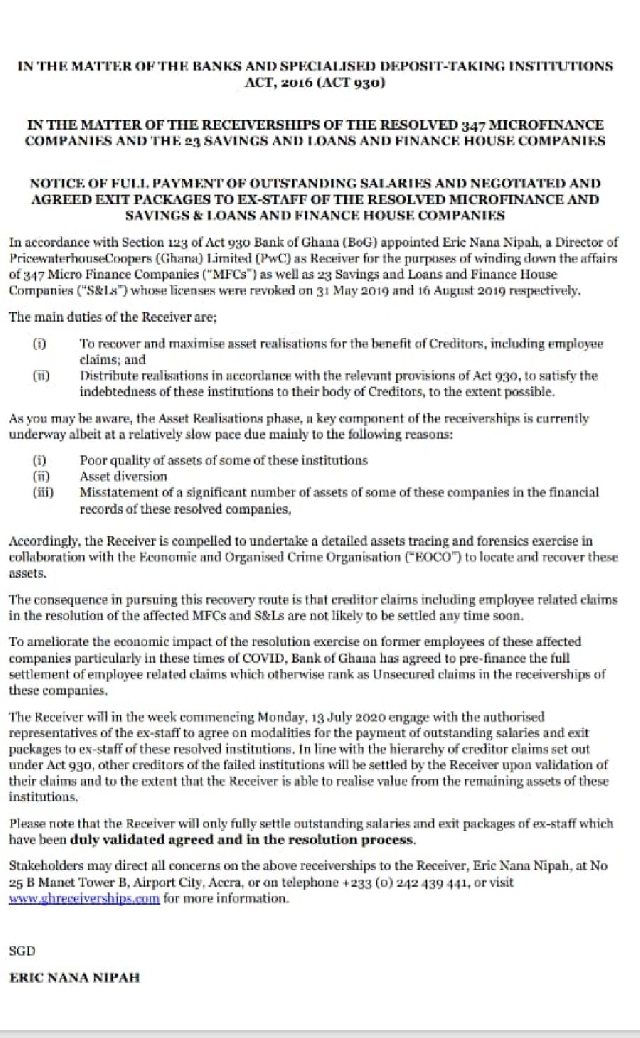 In November last year, the Receiver revealed that the firms had financial obligations to their customers totalling GHS 1.9 billion.

Mr Nipah, a partner at consulting firm PwC, revealed that the clients’ claims were being processed at the 96 operating branches out of the 675 that existed before their closure due to economic reasons.

“People are owed a combined amount of GHS1.9 billion and, therefore, it would be insensitive to continue to run such a huge operation spending so much money when people are not going to be fully paid,” he told freelance journalist Emmanuel Oscar Ugoh in an interview.

The Bank of Ghana (BoG) revoked the licences of the insolvent firms including GN Savings and Loans belonging to businessman Dr Papa Kwesi Nduom on Friday, 16 August 2019.

The central bank then appointed Mr Nipah as the Receiver for the specified institutions in line with section 123 (2) of Act 930.

According to Mr Nipah, he was “appointed a Receiver as a Partner-Director of PricewaterhouseCoopers (PwC)”. He added that it is an industry practice to ensure personal accountability hence “all over the world, all insolvencies are run by individuals and not companies".

Some officials of the New Patriotic Party (NPP) had accused Mr Nipah of working to sabotage the government. However, the Receiver debunked such accusations, maintaining that he is not working with the opposition to make the government unpopular but conducting his work professionally.

"Not at all! I am a professional. I am nonpartisan. I am a Partner-Director of PricewaterhouseCoopers, a reputable professional services firm and we work professionally," he stated.

Mr Nipah expressed his eagerness to round up the receivership exercise saying: "Given all the worries on my mind, the whole of Ghana’s descended on me I can't wait to finish and we are working assiduously to finish as soon as we possibly can."