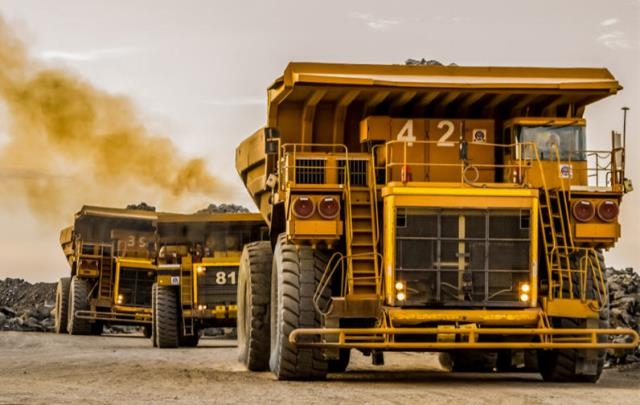 Mining trucks
Some exploration companies in the mining sector have turned to neighbouring Burkina Faso and Cote d’Ivoire to ply their trade due to the brunt of unfriendly exploration tax regime in the country.

So far, about 10 exploration companies have sought business refuge with Ghana’s neighbours in search of the yellow metal.

The Chief Executive Officer of the Ghana Chamber of Mines, Mr Sulemanu Koney, said Ghana was losing its steam to attract more investment in the mining sector due Value Added Tax (VAT) charges on exploration, which was not the case in those two countries.

He, therefore, called for the exemption of exploration companies from the payment of VAT to reduce the risk and high cost of mining expeditions in the country.

Mr Koney was speaking during a visit to the offices of the Graphic Communications Group Limited (GCGL) last Tuesday.

He was accompanied by the Director of External Relations and Communications of the chamber, Mr Ahmed Nantogmah; the Human Resource and Administration Officer, Ms Lawrencia Awuah, and the Communications Officer, Mr Derick Romeo Adogla.

Ghana, the largest gold producer in Africa and sixth largest in the world in 2019, lagged behind Mali as the biggest recipient of exploration inflows and has further been overtaken by Burkina Faso and Cote d’Ivoire.

Currently, landholding cost for exploration firms in the country is about twice and three times the equivalent rate in Burkina Faso and Cote d’Ivoire, respectively.

Exploration is the most critical activity that guarantees the continuous production of minerals and provides a pipeline of new projects and reserves to replace depleted ore bodies.

The cost of land holding for exploration on a 100-square kilometre for nine years is about $40,000 in Ghana, while neighbouring Burkina Faso charges about $21,000 and Mali $10,000, which is three times lower than Ghana’s charges.

Mr Koney said mineral exploration was a high-risk activity, without revenue inflows, and, therefore, relatively expensive, which was worsened by the imposition of VAT on services.

“More so, a large share of the exploration licences (617) is held by Ghanaians who are usually constrained in raising capital to finance their work programmes,” he added.

Mr Koney said it was time for Ghana to position itself as the preferred hub for mining support services, while leveraging that to drive the government’s industrialisation agenda.

The mining industry should be structured to link it up with other sectors of the economy to spur economic growth, he added.

The CEO said that was to ensure that the industry was fully integrated with other sectors for broad-based socio-economic development.

As an immediate intervention, he said, the chamber had triggered initiatives to identify stakeholders, including academia, media and experts in the industry, to help harness the opportunities and address existing gaps for the ultimate repositioning of the industry in order to generate deeper value and meaningful development for the country.

The visit was to seek deeper collaboration with the country’s flagship newspaper, the Daily Graphic, and its sister brands in the GCGL stable to shed light on key issues affecting the mining industry.

Matters bordering on mining in the communities, regulations on mining exploration and the role of the GCGL in advancing the mining industry were among the issues discussed at a meeting between the visiting Chamber of Mines CEO and the Editor of the Daily Graphic, Mr Kobby Asmah.

The mining and quarrying subsector accounted for 7.5 per cent of Gross Domestic Product (GDP) and contributed about GH¢4.2 billion in direct revenues to the country last year.

The country’s gold production has seen a significant rise over the years.

In 2018, Ghana toppled South Africa to become the continent's biggest gold producer, and has since maintained the feat.

Production in that year amounted to 4.8 million ounces, above South Africa's 4.2 million.

Mr Koney said although Ghana remained the biggest gold producer in Africa, the mining industry was not properly integrated into the economy, resulting in its impact not being felt in the broader economy.

“If you look at how other countries have been able to use their mining industry for broad-based socio-economic development, we in Ghana believe we have just been scratching at the surface.

“We are on a journey to sensitise various stakeholders to the fact that we can do a lot more on the back of the mining industry,” he said.

The chamber, the CEO said, was also looking forward to integrating the mining industry with other sectors of the economy, including agriculture and hospitality.

For instance, he said, the chamber would initiate a deliberate approach where agricultural produce would be processed into many products to serve the mining industry.

In order to boost the repositioning drive, Mr Koney said the chamber would harmonise all the revenue streams that went to the assemblies to provide better support for indigenes in the various mining communities.

At the national level, he said, the chamber would work with the University of Mines and Technology, Tarkwa (UMAT) to undertake research to map up all the opportunities within the mining industry.

In order to create adequate awareness of issues affecting the industry, Mr Koney said, it had become necessary for it to partner the Daily Graphic to champion that cause.

He said the Daily Graphic’s distinctiveness within the media landscape, coupled with its harmonious support to the chamber, made it the preferred brand for such a collaboration.

“The Daily Graphic is the place you would want to start any kind of relationship with the media, given your brand, pedigree and the kind of position people place you in terms of hierarchy within the country,” he said.

For his part, Mr Asmah welcomed the partnership and the future path of the mining sector, adding that the media needed adequate information to thrive.

“Without adequate information, I can say that the work of the media will be undermined, and that is why such engagements must be encouraged,” he said.

He stressed the importance of knowledge sharing, saying: “We cannot say we are experts, but whatever we churn out is considered expert opinion, and that is why we must all the time relate with the experts, so that we can provide our readers with that informed knowledge.”

The Editor expressed the Daily Graphic’s commitment to articulate the right concerns in a comprehensive manner to ensure that the right policies were formulated for the benefit of local communities.

“For us at the Daily Graphic, we will definitely collaborate with you; we are going to continuously knock on your doors for the right information, so that we can share with the reading public,” Mr Asmah said.