Your ‘vicious’ attack on Nduom a ‘face-saving’ move for ‘botched’, ‘politically-motivated’ collapse of GN Bank – PPP to BoG Governor 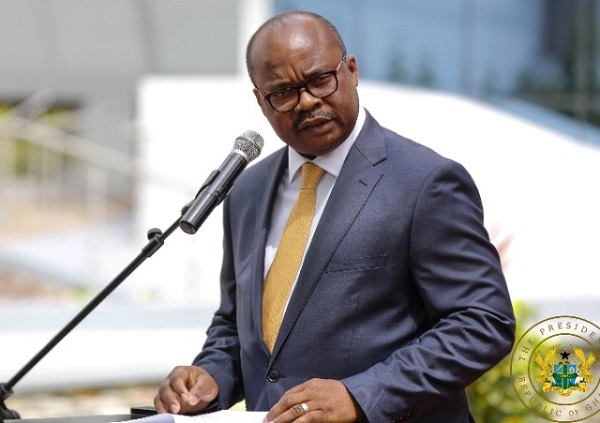 Dr Papa Kwesi Nduom’s party, the Progressive People’s Party (PPP), has tackled the Governor of the Bank of Ghana, Dr Ernest Addison, for saying a recent suit by US-based company Birim Group LLC against Groupe Nduom, the parent company of GN Bank and Dr Nduom’s family, is a vindication of the central bank’s clean-up exercise which resulted in the collapse of GN Bank and some eight other local banks in addition to hundreds of other financial institutions.

At a recent monetary policy meeting of the central bank, Dr Addison said: “I thought that you will congratulate the Bank of Ghana for the work that was done in trying to identify the problems in that bank. Many people were out there vilifying us that we were on a witch-hunt but now you’ve had people outside the country suing GN Bank for the same reasons.”

“So, those who thought we didn’t have a basis for what we did, now the evidence is out there that what the Bank of Ghana was trying to do was the appropriate thing,” Dr Addison said.

However, the PPP, in a statement, said: “We find his remarks very unfortunate, misleading, and mischievous”.

Read the PPP’s full statement below:

STATEMENTTOADDRESS MISCHIEVOUS REMARKS MADE BY GOVERNOR ERNEST ADDISON AT THE 100TH MONETARY POLICY MEETING (MPC) OF THE BANK OF GHANA HELD IN ACCRA ON 31ST MAY, 2021

This statement is to address and respond to a number of inaccurate, unfortunate and misleading remarks made by the Governor of the Central Bank, Dr. Ernest Addison. In a response to a question relating to the suit filed by Birim LLC against Groupe Nduom in the United States, at the 100th Monetary Policy Meeting, the BoG Governor effectively made the following unfortunate statements:

1. That the suit is evidence out there that the BoG's financial sector reform was not a political witch-hunting exercise especially in relation to GN Bank.

2. That the US court system is more expeditious than our courts.

3. That shareholders and directors took assets from the collapsed banks.

We find the above remarks very unfortunate, misleading and mischievous and wish to respond as follows:

-That the suit is evidence out there that the BoG's exercise in the financial sector reform was not a witch-hunting exercise especially in relation to GN Bank.

On this statement, we wish to state that the suit filed in the United States by Birim LLC is actually a continuation of the deliberate and well-orchestrated political smear campaign against a Ghanaian businessman and politician, Dr. Papa Kwesi Nduom by some elements in the current administration. We see the suit as an attempt to divert attention from the negative image that the government has suffered for its high-handedness in the reform agenda.

The suit is an attempt by elements in the government, working with their collaborators, to strenuously seek some form of external or third-party vindication for their deliberate collapse of the businesses of the veritable entrepreneur Dr. Papa Kwesi Nduom.

That is why we see the governor's comments as a corollary to the bizarre suit and an unfortunate attempt to give the suit a cloth of legitimacy and currency.

That the US court system is more expeditious than our courts.

This comment sought to create the impression that the suit filed by the Birim LLC against Groupe Nduom had been expeditiously decided and that the frivolous and baseless claims against Dr. Nduom had been upheld by the court in the US. For the records, the US court in Chicago seized with the matter has not made any pronouncements or delivered its ruling in the matter for the BoG Governor to draw the unfortunate conclusion of a somewhat expeditious trial in the United States.

At the current stage, Counsel for Dr. Nduom and others has filed a response to the suit and has given cogent reasons for the consideration of the court for the matter to be dismissed. The comments by the Governor created the impression that the matter had been concluded and that the wild allegations had been proven or upheld by the court.

Secondly, the suit is between a surrogate claimant and Dr. Nduom and not a case brought against Dr. Nduom by the United States government as some media houses misreported the facts.

Thirdly, on the question of the slowness of our processes, we would like to remind the Governor, and by extension the government, that "slow court processes" in Ghana is a two-way traffic and that some shareholders and directors who also sued the BoG or the government suffer the same processes bemoaned by the Governor.

Judgments in some of the cases have been arrested by the same BoG utilising the very legal processes available in Ghana. To proceed to express some kind of frustration with the processes creates the unfortunate impression that it is only the BoG or the government that suffers undue delays in our courts. Shareholders who have sued the Bank of Ghana are also going through the same legal processes described as slow by the Governor.

Moreover, we would like to address the wild allegations of money laundering levelled against Dr. Nduom by many different people as part of this smear campaign. For the avoidance of doubt, Dr. Nduom and Groupe Nduom have not engaged in any money laundering activity anywhere. In fact, the Bank of Ghana itself has not come to that conclusion or at least, they have not publicly made that allegation against the veritable businessman.

Money Laundering is a criminal offence under our laws and it is regulated by the Anti-Money Laundering Act 2020, Act 1044. According to the Act 1044, a person commits the offence of money laundering when that person converts, conceals or transfers the PROCEEDS OFAN UNLAWFUL ACTIVITY for the purpose of concealing or disguising the illicit origin of the proceeds.

The law also defines what an UNLAWFUL ACTIVITY means and lists about 25 criminal offences and prohibited activities such as trade in narcotics, murder, kidnaping, terrorism, child trafficking etc. Neither Dr. Nduom nor Gold Coast, nor GN Bank nor any of the GN Companies has been engaged in any criminal activity or prohibited activity that constitute an unlawful activity under our laws.

At worst, the allegation of insolvency as a result of the government's refusal to pay its indebtedness to the Groupe is what has been used as a pretext to revoke the licenses of his companies. Hitherto, the companies were licensed and regulated and were engaged in open legitimate lawful business activity for over twenty-five years.

The transfer of funds for the purpose of procuring a fleet of vehicles, industrial raw materials, office equipment, furniture, computers, air conditioning units for 300 plus offices, heavy industrial generators, heavy industrial machinery for printing, manufacturing, quarrying, construction, rice milling and other consumable supplies does not and cannot constitute money laundering. In fact, GN Bank alone had more than three hundred vehicles at the time of receivership, which vehicles have been abandoned and at the mercy of the vagaries of the weather, in addition to the huge cost of garage services, possibly provided by cronies of the people involved in the whole plot.

That shareholders and directors took assets from the collapsed banks.

It is unfortunate for the BoG Governor to continue to focus on what they call prudential violations committed by the directors and shareholders and completely ignore where the substantial parts of the so-called taken assets are located. Some of the shareholders and directors have made legitimate and credible claims of the huge government of Ghana's indebtedness to some of these financial institutions, that if they were paid promptly by the government, the firms would not be classified as insolvent or illiquid.

The Suit in the United States

We would like to take this opportunity to provide some details about the suit filed in the United States. Two former customers of two Groupe Nduom companies in Ghana have ostensibly SOLD their claim against Gold Coast and GN Bank to a US-based company called Birim LLC. So Birim LLC claims that they have paid what GN or Gold Coast should have paid to these two customers. Instead of filing a claim with the Receiver and the Liquidator, as the government of Ghana announced as the procedure to make a claim against GN Bank and Gold Coast, Birim LLC, as part of the smear campaign decided to rather file a suit in the United States as a pretext to make a barrage of unfounded allegations against Dr. Nduom and his business entities. Among other things, the suit is about a claim of $30,000 in respect of the Gold Coast customer with interest and legal fees against Dr. Papa Kwesi Nduom. The suit offers no proof of wire fraud or anything of that nature. It merely refers to a mysterious report from the Bank of Ghana to which an appropriate answer has been offered by GN.

What is the interest of Birim LLC that it would “ACQUIRE” or "BUY" all the interest of Margaret Sekyere's investment? We should pay particular attention to the following facts: Margaret Sekyere has filed a lawsuit at the High Court of Ghana still pending for her alleged investment; she has also filed a claim with the Securities & Exchange Commission for a claim of GHC134,000 for which GHC74,000.00 has been validated. She has possibly received the initial bailout amount of GHC50,000.00 from GCB Capital, which amount Dr. Nduom will be expected to pay to the government of Ghana from his money with the same government of Ghana contractors.

Then she sells her interest to Birim LLC. We are at sea as to the real intentions of these conspirators. Is it about recovering funds or to pursue with others a sinister plan against a Ghanaian citizen? The Governor of the Bank of Ghana is seemingly rejoicing over something which has not taken place. Is he sitting in Ghana pronouncing victory for a case in the US which has just begun? The Governor has left his field of expertise and is now acting like a clear political foot soldier.

In fact, the BoG Governor was so much in a hurry to vilify Dr. Nduom that he refused to notice that the suit in the United States side-stepped his own instituted procedure for claims against the so-called companies under receivership. Some faceless entity like Birim LLC has conspired with Margaret Sekyere to IGNORE your own stated procedures, and yet you are happy to report their actions as a vindication of the deliberate collapse of Ghanaian companies.

We would rather consider their action as a vote of no confidence in your stewardship. For the avoidance of doubt, per the claims of Birim LLC, they should have taken over the interest of Margaret Sekyere in the suit she filed in Ghana and also her claims she filed against Gold Coast with the SEC.

This is what the lawyers call Lis pendens, instead of filing this frivolous case far away in the United States as an agent of elements in government determined to destroy a Ghanaian businessman.

These attempts will never fly.

This second wave of vicious attacks against the person of Dr. Nduom is a face-saving exercise for a botched and politically motivated financial sector reform.

It is also to divert attention from the FixTheCountry campaign led by the youth of Ghana. The incessant attacks on Dr. Nduom is not in the best interest of the Republic of Ghana. He was and is still creating the much-needed jobs our teeming youth are seeking.

The power of government must be exercised in support of its citizens and not to be construed as a tool against political opponents.

The government would be better off fixing the unemployment situation than engaging in needless attacks on its own citizens.