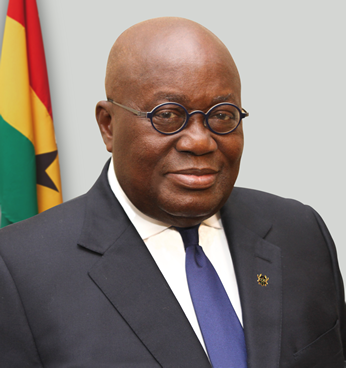 Nana Addo Dankwa Akufo-Addo was born on 29 March 1944. He is the incumbent President of Ghana.

He previously served as Attorney General from 2001 to 2003 and as Minister of Foreign Affairs from 2003 to 2007 under the Kufuor administration.

Nana Akufo-Addo first ran for president in 2008 and again in 2012 but lost both times, as the candidate of the New Patriotic Party (NPP). He was defeated on both occasions by the National Democratic Congress’ (NDC) candidates: Prof John Evans Atta Mills (2008) and John Dramani Mahama (2012).

He was elected as the presidential candidate of the New Patriotic Party for a third time for the 2016 general elections in which he defeated the incumbent, Mr John Dramani Mahama in the first round.

Nana Akufo-Addo is a lawyer.