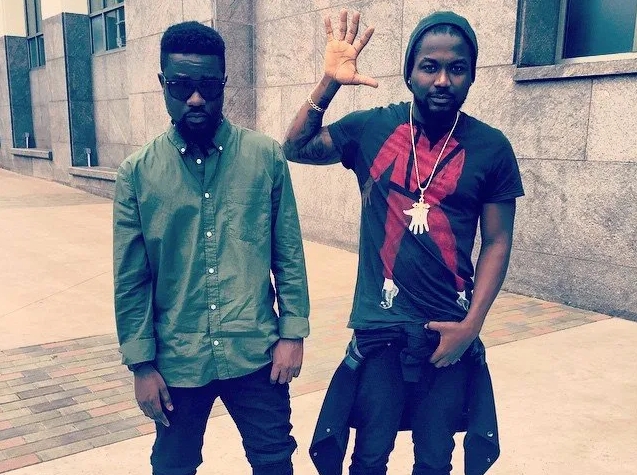 Monday, January 23, 2023, a Twitter User by name Mr Slimhouse and with the handle @Ahenkrah asked the Reggae/Dancehall icon: "Please when was the last time you entered the studio with Landlord Sarkodie, and when are you people joining again?"

To this, Samini, responded with: "Not sure I'll need a verse from Sark." He was categorical also in saying he would never lend his help on a song belonging to Sarkodie. He called the rap icon "Alo," to wit; "Fake."

Samini again said Sarkodie has a hard time being frank when you ask him for a favour. Instead of saying a simple "Yes or no," he would give you the impression that he will assist but eventually "slow you and your project go [will] dull [stall and flop]."

Apparently, he noticed this about Sarkodie when he wanted him on his Burning EP which was released on Friday December 3, 2021. The project featured music stars Efya, Kofi Kinaata and Medikal.

In another tweet, the multiple award-winning singer-songwriter revealed that he gave a verse to Sarkodie for his 'Love Rocks' hit song "for free" and he even did it "under 24 hours." He, however, stressed that Sarkodie pussyfoots "when it comes to returning [such] favours," and is "just allo [fake]."

Tagging Sarkodie, Samini quoted a popular line from the days the rapper was only a fledgling artiste: "You know what time it is," attached laughing and crying emojis and noted that he was not afraid to "shoot [address him] direct[ly]."

He taunted Sarkodie, arguing that he is dependent on other music acts for "hooks and verses... to blow [earn a hit song]."

When a Twitter user with the handle @naoseikwame intimated that Samini was really pained, he admitted it and tweeting in Twi, in effect, said: "If it were you, wouldn't you be pained? I didn't [don't] need him, honestly, because I've never depended on another act to complete my track. It's just beautiful to reciprocate my kind gesture, else it is sheer dishonesty and cheating."

@Naoseikwame noted how without guests, Samini's 22-tracker 'Untamed' from 2018 was a resounding success housing three megahits: 'My Own', 'Obra' and 'Rainbow'. At this, Samini laughed and shrugged, saying: "Tell them about me. Don’t compare me to my mentees."

The Students Representative Council's (SRC) President at the Ghana Institute of Management and Public Administration (GIMPA), the entrepreneur and performer nicknamed The Rain God furthermore stressed that the point of his rant was to underscore the need to: "Do unto others as you expect them to do unto you. Your man [Sarkodie] knows that."

Again, the High Grade Family (HGF) music and talent management company founder called the SarkCess Music founder "disrespectful and fake... my small bro[ther]... He [messed] up [and] I [have] learn[ed] my lesson]."

He categorically stated he has "nothing against Sarkodie and he knows it. He also knows that he owe[s] me [a] personal apology," for reading and ignoring his messages, "after having me send three tracks and choosing one. After asking me if it was a single or an album to which I answered, 'It's an EP'. He [said] 'Cool' [but] he's yet to respond."

Concerning the means by which he addressed the issue and the strong words he used, the multi-genre artiste asserted that: "At this age, and with the number of years [under] my belt, I [don't] sugar coat [things]. Don't ask [me] what you [are not] ready to hear."

Sarkodie featured Samini on the 2014 smash hit 'Love Rocks'. The last time Samini had Sarkodie on a song was on 2018's 'My Own Remix' and that was after the original piece, a Samini solo from 2017, had gained megahit status.

The latest offering by Samini is a two-week old single called 'Abundance'.