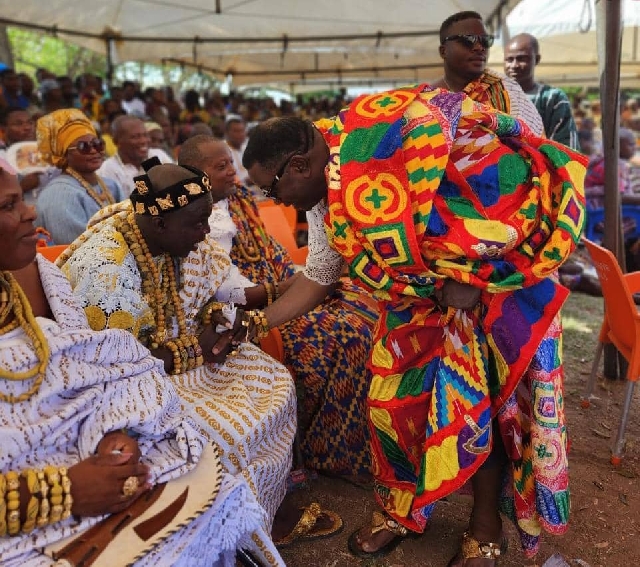 Elvis Afriyie Ankrah exchanging pleasantries with of chief of Anlo

Mr Elvis Afriyie-Ankrah who is aspiring to be the next General Secretary of the main opposition National Democratic Congress (NDC), has hailed the unique colourful symbol of unity that was exhibited by the Chiefs and people of Anlo in the Volta Region at this year’s Hogbetsotso Za festival.

According to him, the festival which was celebrated over the weekend by the people of Anlo, Anlo State in the Volta region, witnessed huge success by drawing people from diverse ethnic groups to promote unity and development.

Elvis Afriyie-Ankrah, the current Elections Director of the NDC, reiterated that ensuring a united front among all people of diverse ethnic groups to help promote the unity of purpose for Ghana’s development is in the right direction.

He was speaking on the sidelines of the Hogbetsotso grand durbar on Saturday.

The Hogbetsotso Za has become one of the most prominent festivals in Ghana which seeks to rally all Ewes across the country and unify Ghanaians of other ethnic groups towards the country's development.

“While the quest for political power is critical in spearheading development, the gracing of the Hogbetsotso Za by the Asantehene, Otumfuo Osei Tutu II, following the special invitation by Awomefia Togbe Sri III signifies a longstanding effort to bring all cultures in Ghana together,” Elvis stated.

At the same event, Elvis Afriyie-Ankrah also took time to interact with former President John Dramani Mahama, leading chiefs in the Volta region, leaders of the NDC across all levels of the party, opinion leaders, elders, members and sympathisers of the party to assure them of his commitment towards a united party in the National Delegates Congress in December.

Elvis Afriyie-Ankrah has declared his intention to vie for the General Secretary position because he believes “Ghana is at the crossroads having been led by the incompetent leadership of Nana Addo Dankwa Akufo-Addo and Vice President Dr. Mahamudu Bawumia who heads the economic management team.”

Elvis Afriyie Ankrah insists, “following the comprehensive development undertaken by the John Mahama-led administration, it has become imperative for the NDC to be elected in the 2024 elections to give hope to the ordinary Ghanaian and restore the dwindling economy” back on track.