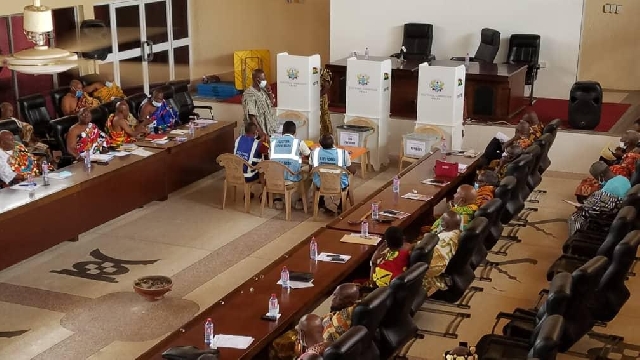 The Paramount Chief of Avatime Traditional Area within the Ho West District of the Volta Region, Osie Adza Tekpor VII, has withdrawn his interest in the Vice-Presidential race of the Volta Regional House of Chiefs (VRHC) election.

He, however, announced his support for Togbega Patamia Dzekley VII of Battor Traditional Area, another aspiring Vice-President.

Addressing the chiefs before the 19th election of the house in Ho on Thursday, 15 October 2020, Osie Adza Tekpor VII, announced his decision to bow out of the race.

Without giving any reasons for his decision, Osie Adza Tekpor VII only urged his supporters to vote for Togbega Patamia Dzekley VII of Battor, adding that the candidate, Togbega Patamia has all the qualities of Vice-president of the House.

Osie Adza Tekpor VII, who is already a member of the National House of Chiefs and aiming to maintain his position, called on the house to vote him again.

This, he said, is to enable him “continue the good works that I’ve started; it’s never easy to be in the National House but I’ve been there before and it will be easy for me”.

On the presidential slot are Togbe Sri III of Anlo State and Togbe Tepre Hodo IV (outgoing Vice-President of the House) of Anfoega Traditional Area.

In all, 52 chiefs are expected to cast their votes out of which 48 were present.

The remaining four are proxy voters.