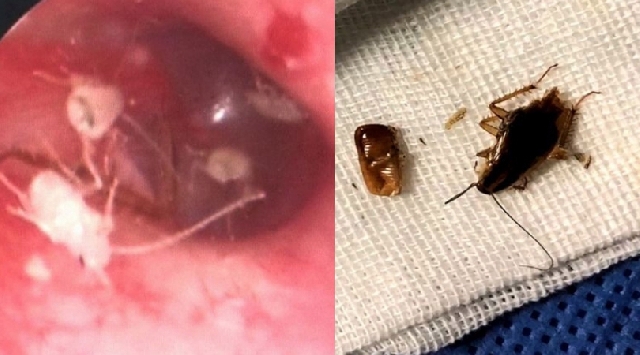 A 24-year-old Chinese man who visited a hospital to complain about a sharp pain in his right ear was shocked to learn that he had an entire family of cockroaches living in his ear canal.

Identified only as “Mr Lv”, the young man arrived at Sanhe Hospital, in Guangdong Province, southeast China, last month, complaining of sharp pain in his right ear, and a sensation like something was crawling and scratching in his ear. Dr Zhong Yijin, an ear, nose and throat (ENT) specialist at the hospital examined the man’s ear canal and was shocked to see a full-grown German cockroach and over 10 of its offspring running around.

Upon hearing about the creepy squatters that had taken over his ear, Mr Lv told doctors that one of his family members had shone some light in his ear and had spotted a big bug inside. He added that he had the habit of leaving food by his bed at night, which doctors suspect is what attracted the bugs. One of them must have viewed the man’s ear as an incubation chamber and crawled inside to lay eggs.

Upon discovering the cause of the man’s ear pain, hospital staff proceeded to extract the cockroach and its small babies with tweezers. Mr Lv was left with minor injuries to his ear and was discharged with a course of antibiotics.

Although doctors recommend good hygiene and nets to keep critters from crawling into your ears, we’ve seen a bunch of weird cases of people discovering all sorts of creepy crawlers living inside their ear canals, from web-spinning spiders to Gecko lizards.