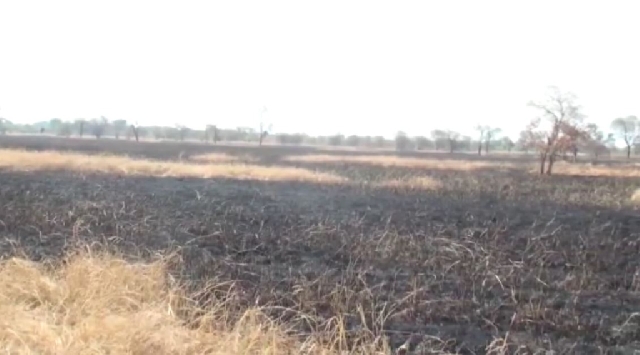 Parts of the burnt rice farm

A 413-are rice farm belonging to the Northern Regional Chairman of the main opposition National Democratic Congress (NDC), Ibrahim Mobila, have, allegedly, been set ablaze by arsonists in a farming community at North East Gonja District of the Savanna Region.

The incident preceded the party’s demonstration in the region on Wednesday, against the Electoral Commission’s declared results in the recently-held general elections.

The locals managed to fend off the fire at some point.

The blaze consumed some 320 acres of the farm.

The fire was confined to Alhaji Mobila’s farm.

He told the media that some 85% of the farm was decimated before some locals in a village called Kujere mobilised themselves in communal labour fashion to quench the flames.

Alhaji Mobila said rather than reporting the arsonist to the police, he would leave judgment to God.

“That person has mentioned to me before when we were planting, that no one has been able to farm but I have come to do it.”

He expressed gratitude to the community for coming to his aid.

“The village people have done very well, about 85% got burnt but at least I have about 15%, which I can recover for next year,” he added.