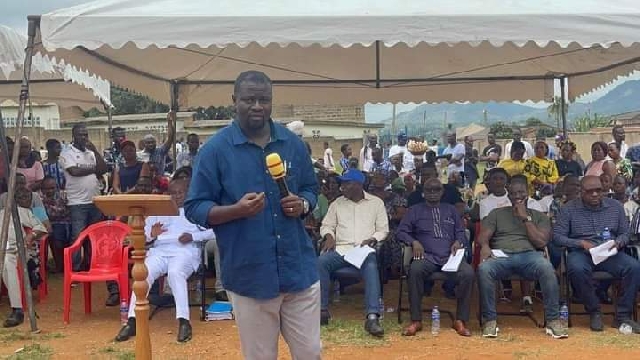 The Member of Parliament for Nsawam Adoagyiri Constituency in the Eastern Region, Frank Annoh-Dompreh, on Friday, September 16, 2022, cut the sod for the construction of two separate 6-unit classroom blocks at Bishop Atto M/A School and Father Weiggers Roman Catholic Basic School all in the Akwapim South municipality.

Mr. Annoh-Dompreh re-echoed his pledge and desire to reward brilliant students or schools that would make 9-ones in the yet-to-be-written Basic Education Certificate Examination (BECE) by giving each student a brand new laptop while the school would be given a special package.

The MP has already presented 10 desktop computers to the school.

In other related development, the Majority Chief Whip inspected similar projects that have already commenced and taken shape at Panpanso by the governing New Patriotic Party (NPP).

It is the desire and commitment of the MP to see Nsawam-Adoagyiri at the top of this year’s  BECE in entire Ghana.