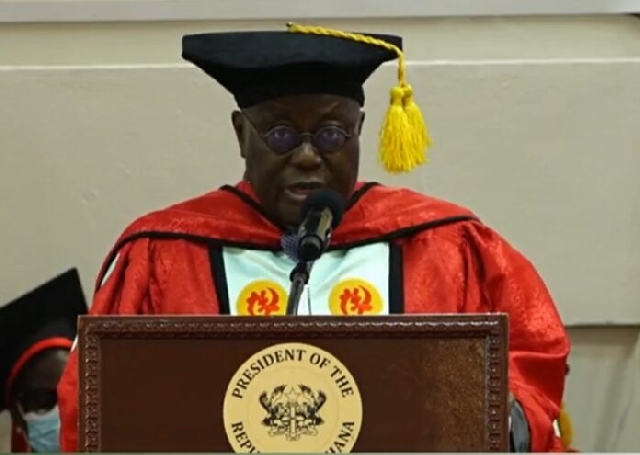 The University of Cape Coast has honoured President Nana Addo Dankwa Akufo-Addo with a Doctor of Philosophy degree in educational leadership.

The conferment makes President Akufo-Addo an alumnus of the university.

The doctorate degree was to recognise him for the several projects his government has embarked on in the educational sector such as the Free SHS programme, among others.

Speaking at the congregation on Saturday, 29 May 2021, the Vice-Chancellor of the school, Professor Johnson Nyarko Boampong, indicated: "The occasion of Doctor of Philosophy in educational leadership on the first gentleman of the land... Individuals who receive such awards are consistent with global best practices".

"One of the boldest decisions taken by His Excellency Nana Addo Dankwa Akufo-Addo as president was to introduce the Free Senior High School policy in September 2017 despite the huge financial implications on the economy and uncertainties shrouding the concepts at that time", he said.

"However, his resilience in inspiring leadership has contributed largely to the realization and continuous success in the Free Senior High School policy.”

He continued: “It is instructive to know that over the last 4 years, more than a million graduates from the Junior High School have benefitted from this policy".

"By the conferment of this degree on the Excellency the President, he becomes an alumnus of the University of Cape Coast and the second to occupy the high office of president of Ghana".

"The first being President Agyekum Kufuor”.

"I assure all of you that I will do my very best to uphold the highest standards associated with this award," President Akufo-Addo said.

Prof Boampong also called on President Akufo-Addo to support the university by constructing a hall for them.

He further noted that the hall, when completed, will be named after the President.