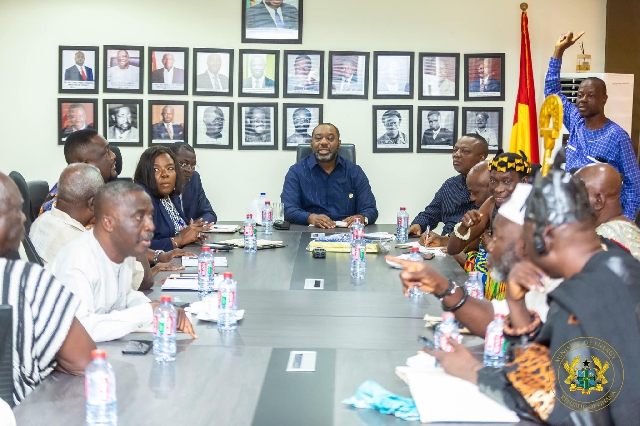 Energy Minister Matthew Opoku Prempeh has asked the chiefs and opinion leaders of the Krobo area to sit down and engage with the Electricity Company of Ghana toward finding a lasting solution to the protracted disagreement between the two parties that has led to the electricity service provider curtailing power supply to the Krobo people.

At a meeting with officials of the ECG and the chiefs and opinion leaders of Krobo on Tuesday, 2 August 2022, Dr Prempeh expressed his disappointment with the protracted nature of the impasse and stated without mincing words that the Electricity Company of Ghana (ECG) is for all Ghanaians and, thus, exists to provide efficient and reliable service to all Ghanaians including the people of Krobo.

“Neneme, the people of Krobo, toward solving this matter, cannot say they don’t want prepaid meters but want postpaid. It is the ECG’s sole mandate to make that determination especially as the company work to get over their continued losses through the use of the smart metering system,” he said.

The above statement from the Minister was on the back of a position by the Krobo people that they want the reinstallation of postpaid meters which has become the subject of controversy. It is the installation of these meters that was met with resistance from the youth leading to the maiming of some staff of the ECG.

The Minister said the new metering system is part of a rectification agenda and, therefore, any attempt to resist it will smack of being against the peace-building process.

Managing Director of the ECG, Mahama Dubik, expressed regret that the matter sometimes degenerated into violence. He said as Managing Director he is concerned about the safety of ECG workers and their installations in the Krobo area and, thus, assured the Minister that his side is ready for an amicable resolution.

A leading Member of the Krobo delegation and a former Member of Parliament for the area, Michael Teye Nyaunor said they were pleading with the Minister to intervene to ensure that the people of Krobo have light and can go about their mundane duties without any fear nor hindrance.

The Minister who is also the Member of Parliament for Manhyia South has set up a joint committee made up of ECG officials and three nominations from the Krobo Chiefs, which will also include representatives from the national security to start engaging from Wednesday, 3rd August 2022, towards an amicable solution.

Dr Prempeh expressed the confidence that this is a huge step in reaching a peace accord.

The Minister asked the committee to also look at ring-fencing bills within the period of controversy and also make a determination on a payment plan.

The impasse between the ECG and the Krobo people dates back to 2014 when the people had challenges with their billing system leading to agitations and confrontations.