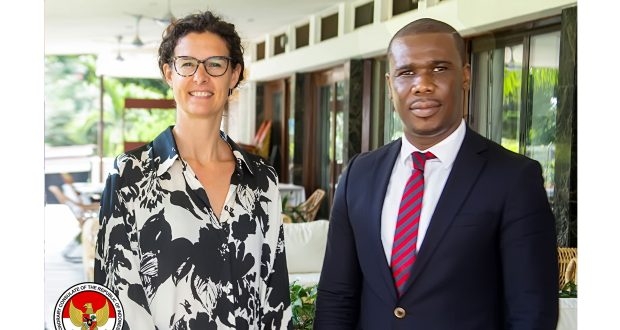 The Honorary Consul of Indonesia in Ghana, Paskal A. B. Rois, has paid a courtesy call on the British High Commissioner to Ghana, Harriet Thompson at her residence in Accra.

The visit forms part of efforts to deepen the bond of friendship and diplomatic ties between Ghana, Britain and Indonesia, as well as promote bi-lateral trade and tourism among all three countries.

Both leaders also shared opportunities available to the three countries for exploration.

A release from the Indonesian Consulate said, Mr Rois informed the British High Commissioner that Ghana had over the years improved and increased her trade with Indonesia.

The Honorary Consul of Indonesia indicated that a number of Indonesian companies were working in Ghana in the field of food production including Indomie Noodles; soap and detergents including Medisoft, Santex among others.

He also shared with the British High Commissioner, some of the successes chalked since he assumed office a year ago as the Consul to Ghana.

He noted that he had been able to institute the Indonesia-Africa Trade Mission, aimed at strengthening bi-lateral trade and relationship between Africa and Indonesia.

The Honorary Consul also noted that about 10 Ghanaians were currently studying for a Doctorate of Philosophy Degree in Indonesia. A programme which is partially funded by the government of Indonesia.

He added that five of such beneficiaries left Ghana in July, to defend their thesis in Indonesia.

The remaining five are also getting ready to do same.

For her part, the British High Commissioner, congratulated the Indonesian Consul for his achievements so far in the diplomatic space.

Ms Thompson guaranteed the commitment of the British High Commission in assisting Ghanaian businesses and individuals to develop.