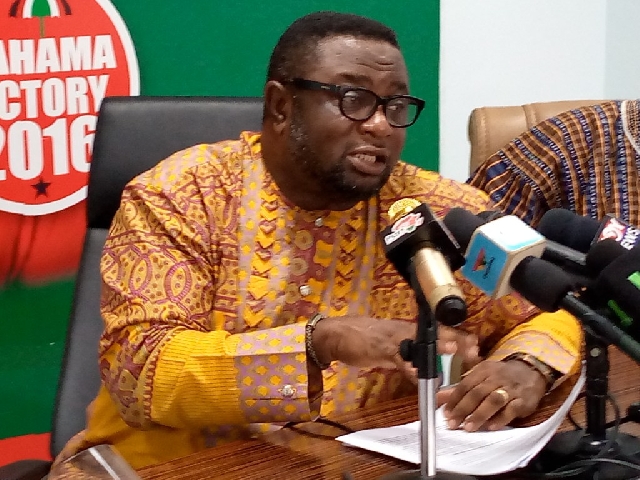 The Ghana Police Service must update the country on the case involving some persons who were arrested with already-thumb-printed ballot papers during the 2020 polls, the Director of Elections of the main opposition National Democratic Congress (NDC), Mr Elvis Afriyie Ankrah, has demanded.

Mr Ankrah told Joshua Kojo Mensah on Class91.3FM’s 505 news programme on Thursday, 28 October 2021 that “these are matters that are already in the public domain”, adding: “Indeed, if you have an IGP, who is very proactive and is arresting people for brandishing guns on social media, for which, I think, he deserves commendation – arresting people for misdemeanours, for which he deserves commendation – then all those grievous issues that occurred during the elections should also be given priority”.

Indeed, he said: “I think it’s important to look at the issues in their context”, explaining: “If you saw some of the pictures and videos, the gentleman who was arrested in Ejura with already-thumb-printed ballot papers, thumb-printed for Nana Akufo-Addo, was arrested by members of the Ghana Police Service”.

“I think it’s important to know what the Ghana Police Service is doing with that case because a proper investigation will then unravel where he got those already thumb-printed ballot papers which had the official validating stamp of the EC”, he noted.

That then, Mr Ankrah contended, “will lead to all these other matters”.

“So, I think it’s a no-brainer that these issues are already in the system”, he stressed.

He said: “However, because Dr Bossman Asare came out recently and pretended, in the face of overwhelming documentary video evidence, that these things did not occur and he said that they were going to report to the police, we are taking up that challenge”.

“Should the police say they have not seen those things, we’ll give them the benefit of the doubt and supply them with all that information and more and then they should tell us how far they’ve gone with the persons that were arrested with the thumb-printed ballot papers, those that were disposed of by us with their support – the police were part of the team that supervised the burning of the one million ballot papers and the National [Intelligence] Bureau”.

A few days ago, the Electoral Commission asked the Ghana Police Service to investigate a claim by former president John Mahama that the election management body secretly thumb-printed some ballot papers which were used to pad the results in favour of the governing New Patriotic Party in the 2020 polls.

Deputy Chairman of the EC in charge of Corporate Affairs, Dr Eric Bossman Asare, told journalists at a press conference on Monday, 25 October 2021 that: “The former president has said that the EC thumb-printed one million ballot papers in favour of the President of the Republic. This is untrue”.

“This is not a matter that should be ignored, and we call on the Ghana Police Service to investigate it,” Dr Bossman Asare added.

“This is a great matter that undermines the credibility of the electoral process and should not be ignored. We call on him to provide evidence to support this claim,” he challenged.

According to Dr Bossman, “the transparency of our process makes it totally impossible for this to happen”, explaining: “The ballots cast are cross-checked against the list of the number of voters who were verified and issued with ballot papers”.

Also, he said: “Nationwide, we had no issue of overvoting at all the 38,620 polling stations except in Savelugu in the parliamentary election where there was one over voting”.

“The police should investigate this as a matter of urgency due to its potential to derail and undermine our democracy and lead to a lack of confidence in our system and processes,” Dr Bossman Asare noted.

Two weeks ago, Mr Mahama said some 1 million extra ballot papers which were printed for the 2020 general elections, were thumb-printed in favour of the governing New Patriotic Party and stuffed during last year’s polls.

“More than one million extra ballot papers were printed, which the EC claimed happened by mistake but on the day of the elections, some of the more than one million extra ballot papers had already been secretly thumb-printed in favour of the NPP”, Mr Mahama alleged when he addressed the Divisional Chief of Prestea Himan, Nana Nteboah Prah, recently, as part of his Thank You tour of the Western Region.

“And, so, all these things dented the credibility of the polls and caused an embarrassment”, the 2020 flag bearer of the main opposition National Democratic Congress said.

He noted that it was important that everybody felt satisfied with the results of any election but fudging results stir up a lot of suspicion.

Mr Mahama also complained that the way the Supreme Court dealt with his election petition case was not fair.

Responding to a recent assertion by the Chair of the Electoral Commission, Mrs Jean Mensa, that the 2020 polls were the best-ever for Ghana, Mr Mahama said: “I heard her [Jean Mensa] say ‘it’s the best election Ghana has ever had’ and yet you run away from scrutiny at the Supreme Court”.

“So, how do you boast that ‘it’s the best election has ever had?’”

“If you believed it’s the best election Ghana had, then you should have mounted the witness box to be interrogated for everyone to ascertain that fact”.