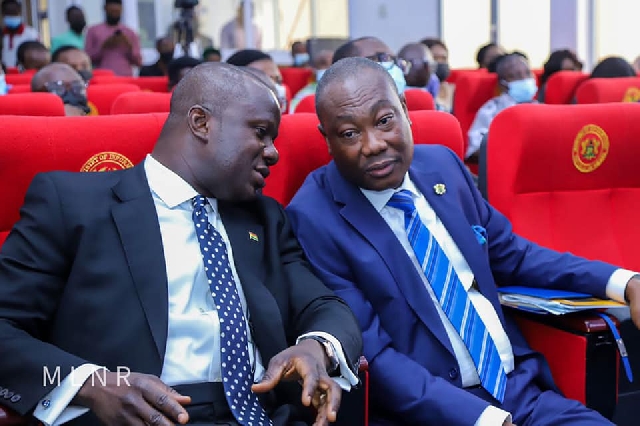 The Minister of Lands and Natural Resources, Mr Samuel A. Jinapor, has declared that the 3% withholding tax which encouraged smuggling in the mining sector has been slashed to 1.5%, which is to be collected at the point of production, specifically the mining sites.

The minister reiterated the president's intent of "indigenising" the whole mining framework, adding that ensuring that mining companies retain the full value chain in the country is what the Ministry and the Minerals Commission are poised to enforce.

The minister stated that there is more to the mining sector than galamsey and, so, he is particularly happy that the developments achieved have taken a holistic approach so far.

He noted that the ministry cannot solve all the problems in the mining sector but hopes to do its best by working with a team of up-to-the-task experts.

Mr Jinapor stated this during the Minister's Press Briefing on Tuesday, 23 November 2021 at the Information Ministry.

He called on Ghanaians to support the Ministry and the Minerals Commission to achieve more in the mining sector.

"We will call on Ghanaians to give us all the support for us to be able to handle the mining sector; the lands and forestry sub-sectors for the benefit of all Ghanaians," he stated.

Speaking on the same platform, the Chief Executive Officer of the Minerals Commission, Mr Martin Ayisi, set the records straight with respect to their duties.

He said "we do not issue licences, we only regulate the mining sector".

He highlighted some achievements the Commission has chalked in the last 8 months since he assumed office.

Among many others, he said the Commission has abolished the paper-based application system effective November 1, 2021; digitised all office records across the country and also commenced online application for small-scale miners, of which 1,700 have already registered.

He also mentioned that up to eleven new items have been added to the local content listing.

He disclosed that large-scale surface mining operations are now to be fully taken over by Ghanaians, as well as catering and drilling services while 20% of all financial services in the sector is reserved for Ghanaian banks.

The CEO added that they believe that Ghanaians are now ready and have the capacity to undertake these duties on a large-scale basis.

He, however, admitted that Ghanaians are not technologically ready for large-scale underground mining and, so, still partnering foreigners on that front.

He said to ensure proper and effective monitoring, which will be done by officers of the Commission, 20 pickup vehicles will be provided through the efforts of the sector minister, Mr Jinapor, by the end of the year.

As a way of encouraging and strengthening officers for the task ahead, Mr Ayisi said the Commission is constructing new offices across the country and also renovating laboratories to enhance their work.

Touching on the Community Mining Scheme (CMS), the CEO declared that the oversight committee will be rolled out soon.

He added that 100 mercury-free machines will be provided to help stop the use of the substance in mining.

Stating the timelines for the delivery of these mercury-free machines, he said the first 20 will be available within the next two weeks and the rest by March 2022.

Mr Martin Ayisi also announced that the Reclamation Programme to restore lost lands has started in Kumasi and will be continued in the Central and Western North regions of Ghana.