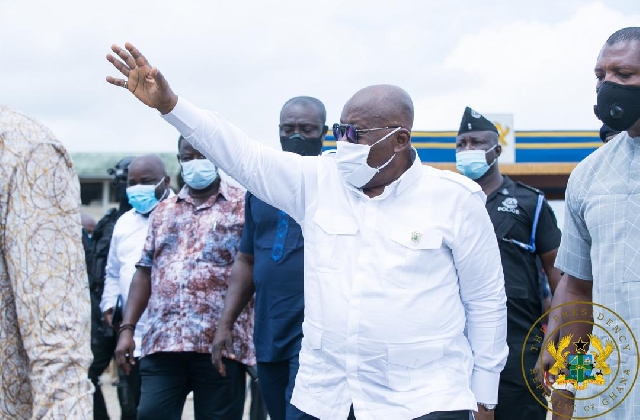 President Nana Addo Dankwa Akufo-Addo has described himself as a leader who can be trusted and, thus, asked Ghanaians to continue to believe in him to “take the country to a good place”.

“The most important thing I want to say is that I want Ghanaians to know I didn’t become President to deceive anybody.

“Everything I wanted to do in education, industry, agriculture, each one of the policies they said we couldn’t do it and it was misplaced, but Ghanaians have realised I came to tell the truth, I came to help the nation to prosper and that is exactly what we are doing now”, the President said.

“I want the Ghanaian people to understand that Akufo-Addo is a truthful person and he is a man of his words and, so, they should trust me”, Mr Akufo-Addo said.

Nana Akufo-Addo said these in an interview on Techiman-based Classic FM on Tuesday, 8 September 2020.

The President is on a six-day tour of Bono East, Bono and Ahafo regions.

On day two of his visit, which is today, Wednesday, 9 September, the President will cut the sod for the construction of Tuobodom town roads, attend a durbar and inspect the ongoing construction of the Regional Coordinating Council in Techiman South and North.

He will then inspect the ongoing Baanafo-Zezera Adamsu road construction in Jaman South and visit the WEDDI Africa Tomato Processing Factory and Agro-Farms in Berekum West.

The President will continue his tour on Friday, 11 September with the inspection of ongoing rehabilitation of the 15-km New Dormaa Yawhima road among others and will attend a durbar of chiefs and people of Odumase Kwatire and Adentia Badu.

On Saturday, 12th and Sunday 13th September, President Akufo-Addo will inaugurate and inspect ongoing projects in Tano North, Tano South, Asutifi North, which include the opening of a 68-bed ward doctors’ accommodation and children’s ward at the Kenyasi Government Hospital.

In the Ahafo region, President Akufo-Addo will attend durbars, commission a business Resource Centre in Goaso, cut sod for the construction of a 30-bed polyclinic in Mim and inspect the ongoing construction of roads in Sankore before wrapping up his tour.

Throughout the tour, the President will use the opportunity to hear first-hand from the people and commit to the remaining parts of his administration’s agenda.