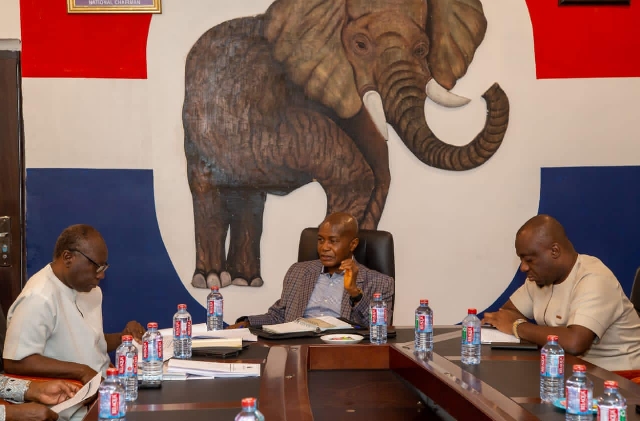 The New Patriotic Party (NPP) has called on its own government, through the Finance Minister, Ken Ofori-Atta, to explore the possibility of exempting individual small bondholders, especially pensioners, from the government’s debt exchange programme.

The General Secretary of the NPP, Mr Justin Kodua Frimpong made the appeal to the Finance Minister, when the Minister paid a visit to the headquarters of the ruling party on Friday, 13 January 2023.

According to Mr Koduah, the party's leadership continues to be inundated with these concerns, thus, his appeal to the Finance Minister to take a critical look at the policy.

The government is currently negotiating a programme with the International Monetary Fund (IMF) for a $3-billion credit facility programme, thus, necessitating the debt restructuring exercise.

Under the programme, domestic bondholders have been asked to exchange their instruments for new ones.

Individual bondholders including pensioners have kicked against the move and threatened to sue the government if it goes ahead with its plans.

Mr Ofori-Atta’s visit to the headquarters of the NPP was a response to the Party-Government Engagements initiative introduced by the leadership of the Party, aimed at bridging the gap between government appointees and various stakeholders of the party.

He was warmly received by the national executives of the party led by Chairman Stephen Ayesu Ntim.

In his welcome address, Mr Ntim disclosed that the party-government engagements were introduced due to the urgent need for broader collaboration between government appointees and Party stakeholders in preparation for the 2024 general polls.

For his part, Mr Ofori-Atta admitted that Ghana was plagued with difficult socioeconomic conditions in 2022, as skyrocketing inflation and high interest rates triggered a cost of living crisis.

He, however, noted that the Ministry of Finance is determined to achieve macroeconomic stabilisation to provide an enabling environment for businesses to thrive and also enhance the living conditions of the general populace.

He recounted the economic feat in the first term of the Akufo-Addo administration which made Ghana one of the fastest-growing economies in the world.

Mr Ofori-Atta noted that the socioeconomic foundation that was laid by the Akufo-Addo administration was intended to usher Ghana into a new dawn of sustainable economic growth and prosperity.

He, however, observed that the devastating and lingering impacts of the COVID-19 pandemic and the ongoing Russia-Ukraine war on the local economy have occasioned challenges for businesses and individuals alike.

He asserted that the government's Extended Credit Facility agreement with the International Monetary Fund (IMF) would energise and stabilise the local economy.

Moreover, he assured the leadership of the party that the government has no intention to cancel the free senior high school programme, as it remains an important social safety net for the majority of Ghanaians.

In his concluding remarks, the Minister of Finance thanked the leadership of the party for the warm reception and commended them for their wise counsel.

He further urged the leadership of the party to put in place adequate guidelines to ensure the smooth conduct of its Parliamentary and Presidential primaries as that is critical to the Party’s quest to win a-historic third consecutive general elections and “Break the eight”.