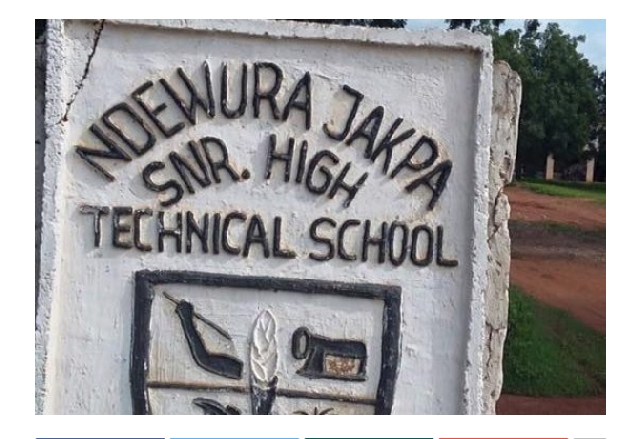 Students of Ndewura Jakpa Senior High Technical School at Damongo in the Savanna Region, rioted on Wednesday night in protest against what they describe as the strict invigilation of the school authorities in the ongoing West African Secondary School Certificate Examinations (WASSCE)

They are also against the social-distancing measures put in place in the exam hall.

The rioting students vandalised school property, a situation that necessitated the deployment of both soldiers and police personnel to bring the situation under control.

The male students ran away upon seeing the soldiers.

During the melee, the headmaster and staff on campus had to flee from the stone-hurling students.

The MCE for West Gonja Municipal Assembly, Saeed Jibril intervened by speaking to the students for calm to prevail.

No arrest has been made yet.

This is the third such incident in less than a week since the WASSCE started on Monday.

For instance, a team of police officers had to be deployed to the Juaben SHS in the Juaben District of the Ashanti region after the final-year students hit the streets to demonstrate against the teachers and the headmaster of the school over similar concerns.

The students said they could not write the paper because none of the things they studied featured in the exam questions.

The police say they had to move in quickly to disperse the students from the streets.

In order to ensure peace on campus as the students sat the Leatherwork and ICT (elective) paper on Wednesday, ACP Stephen Tane Ngissah told Kumasi FM's Elisha Adarkwah that they have deployed a team of police personnel to the school.

Prior to the Juaben SHS incident, students of the Tweneboa Kodua SHS at Kumawu in the Sekyere Kumawu District, also in the Ashanti region, vandalised school property in anger for not being allowed to cheat in their first paper.

The enraged students hurled abusive words at the school authorities as they went about destroying school property amidst complaints that the first paper was too difficult an exam to sit.

They also complained that the supervision of the invigilators was too strict.

It took the intervention of the District Chief Executive (DCE) of Sekyere Kumawu, Mr Addai Agyekum, told calm the situation.

On Wednesday, a Deputy Chairperson of the National Commission for Civic Education (NCCE), Ms Kathleen Addy, condemned the vandalism.

Speaking about the incident on the Civics 101 segment of Class91.3FM’s Executive Breakfast Show on Wednesday, 5 August 2020, Ms Addy told host Benjamin Akakpo that: “For me, it’s one of the saddest things that happened in a country that is pushing, trying to make things betters, especially in the education sector”

“For this to happen, I think it’s extremely unfortunate the students made these videos where they were talking and being very rude to everybody and the only thing they are concerned about is that their exam was tough and they were not allowed to cheat”, she condemned.

Ms Addy said: “I think it’s a tragedy that young people can confidently stand up and say that.”

As far as she is concerned, the destruction caused by the students is inexcusable and unjustifiable.

“The video I saw was that they were upset that the exam was difficult, they were upset that the invigilation was too strict, and, for me, I’m sorry but I can’t make any kind of excuse for those things. To trash up your school and school property and go on the rampage for that, I’m sorry but I can never excuse it because even if you have a problem, there’s got to be a way of resolving it – parents can come in, all kinds of others can be drawn into it to ensure that the right thing is done”, she said.

This year’s WASSCE started on Monday with a total of 375,737 candidates in over 796 examination centres across the country.

The Ashanti region had the highest number of candidates, 87,295, followed by Eastern region with 56,467 candidates.

In the Northern, Savana and North East Regions, 24,830 candidates are expected to sit the examination with 14,105 being males.

The Western and Western North regions has 24,332 candidates with 12,601 females.

The candidates are from 641 public and 335 private schools.

Depending on their courses, the candidates are expected to write four core subjects and three other electives.

The examination is expected to end on 5 September 2020.