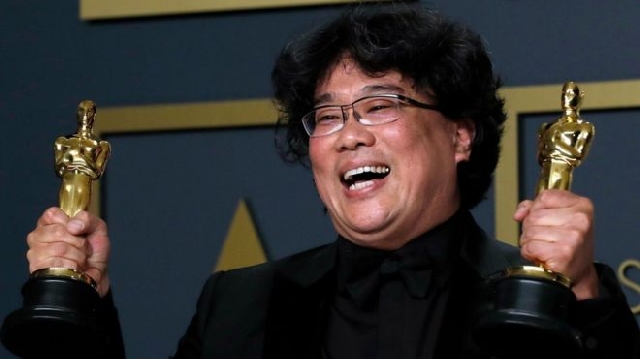 Brad Pitt and Laura Dern scooped the supporting acting awards for their roles in Once Upon A Time in Hollywood and Marriage Story respectively.

The World War One epic had been the favourite to win best picture, but its awards all came in the technical categories.

The film is a vicious social satire about two families from different classes in Seoul - one who live in poverty in a semi-basement, and another rich family residing in a large home.

It has now managed what no other subtitled film has done in the 92-year history of the Academy Awards and won best picture.

"I feel like I'll wake up to find it's all a dream. It all feels very surreal," Bong said.

Producer Kwak Sin-ae, who collected the trophy, said: "I'm speechless. We never imagined this to happen. I feel like a very opportune moment in history is happening right now."

There were boos when organisers tried to cut short the best picture acceptance speech by turning the stage lights off - leading the lights to be turned back on, allowing the celebrations to continue.

Pitt won the first acting Oscar of his career - picking up the best supporting actor trophy for his role in Quentin Tarantino's film.

He was the first winner of the night, and immediately used his speech to attack the way the impeachment proceedings against US President Donald Trump were handled.

He referred to the fact that Republican senators voted against allowing witnesses including former National Security Adviser John Bolton to give evidence.

"They told me I only have 45 seconds up here, which is 45 seconds more than the Senate gave John Bolton this week," he said. "I'm thinking maybe Quentin does a movie about it and in the end the adults do the right thing."

The 56-year-old moved from the political to the personal, paying tribute to co-star Leonardo DiCaprio and reflecting on his journey to Hollywood superstardom.

"I'm a bit gobsmacked," he said, getting emotional. "I'm not one to look back, but this has made me do so."

Joaquin Phoenix: 'I've been a scoundrel'

Phoenix, who won best actor for his remarkable performance in the origin story about Batman's nemesis, also used the podium to send a heartfelt message about the state of the world, saying actors have the power to give a "voice for the voiceless".

After telling the audience to stop clapping him as he took to the stage - "Don't do that" - he managed to cover topics from animal rights and the environment to racism and sexism.

The vegan activist told the audience that "we feel entitled to artificially inseminate a cow, and when she gives birth, we steal her baby even though her cries of anguish are unmistakable".

He also pointed out his own flaws: "I've been a scoundrel in my life. I've been cruel at times and hard to work with, but so many people in this room have given me a second chance."

He ended his speech by quoting a lyric written by his late brother River: "Run to the rescue and love and peace will follow."

A day before her 53rd birthday, Laura Dern won best supporting actress for playing a divorce lawyer in Marriage Story.

She comes from an illustrious acting family, but in winning managed something her parents have not. Mother Diane Ladd has been nominated for three Academy Awards, and dad Bruce Dern has two unsuccessful nominations.

"Some say never meet your heroes," their daughter told the audience. "But I say if you're really blessed, you get them as your parents."

Meanwhile, Zellweger used her speech to pay tribute to Garland, who was nominated for two Oscars in the 1950s and 60s.

"Judy Garland did not receive this honour in her time," the actress said. "I am certain that this moment is an extension of the celebration of her legacy."

The British winners Sir Elton John and songwriting partner Bernie Taupin won best original song for (I'm Gonna) Love Me Again from Rocketman. It's Sir Elton's second Oscar, 25 years after winning for The Lion King. After receiving 13 unsuccessful nominations, Roger Deakins has now won his second Oscar in three years, picking up the trophy for best cinematography for 1917. Dominic Tuohy was up against himself in the visual effects category - nominated for Star Wars: The Rise of Skywalker and 1917. He won for 1917 (alongside Guillaume Rocheron and Greg Butler). British pair Mark Taylor and Stuart Wilson picked up the sound mixing award for the same film. Costume designer Jacqueline Durran won the second Oscar of her career for her work on Little Women. British-made Learning To Skateboard In A Warzone (If You're A Girl) scooped best short documentary. Other notable winners Joker composer Hildur Gudnadottir became the first female winner of best original score since 1998. American Factory, the first film from Barack and Michelle Obama's production company, was named best documentary feature. (The former first couple weren't there, however.) Toy Story 4 won best animated feature, nine years after Toy Story 3 won the same award. Former American football player Matthew A Cherry won best animated short film for Hair Love and dedicated the award to late basketball star and past Oscar winner Kobe Bryant, saying: "May we all have a second act as great as his was." And some notable omissions Cherry and collaborator Karen Rupert Toliver were the only black winners. And, with all four acting nominees being white, the only other ethnic diversity among the winners came from the Parasite team and best make-up victor Kazu Hiro. All the main nominated films won at least one award - except Martin Scorsese's The Irishman, which had 10 nominations but went away empty-handed. Scorsese did get a standing ovation, however, when Bong Joon-ho mentioned him on stage. No host (but two hosts)

For the second year, the ceremony had no host.

It all started with an incendiary performance by singer and Moonlight actress Janelle Monae. "We are celebrating all the women who directed phenomenal films," she said. "I'm proud to be here as a black queer woman."

Then Steve Martin and Chris Rock appeared to deliver the traditional opening monologue as a double act. "We both have hosted the Oscars before. And this is such an incredible demotion," Martin quipped.

He remarked: "Think how much the Oscars have changed in the past 92 years. Back in 1929 there were no black acting nominees." Rock added: "And now in 2020 we've got one."

They then gave way to a string of other celebrities to introduce each award.