Okyenhene marks 20 years on the throne with grand durbar 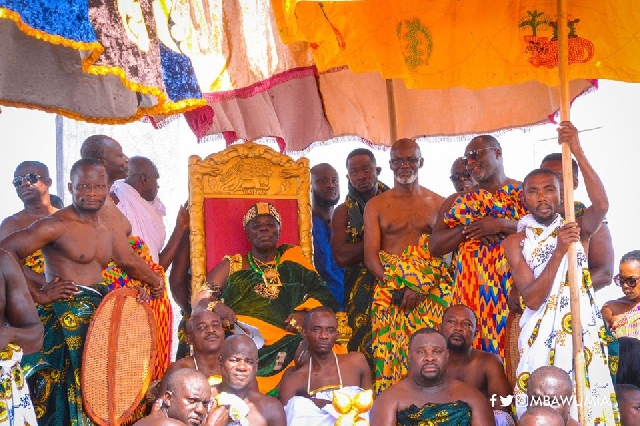 The chiefs and people of Akyem Abuakwa on Saturday, 14 December 2019 organised a grand durbar to mark the 20th-anniversary celebration of Osagyefuo Amoatia Ofori Panin II as Okyenhene.

Nana Amoatia Ofori Panin II is the 35th paramount chief to have ascended the Ofori Panin stool on 4 October 1999, on the passing of his predecessor and brother, Nana Kuntunkununku II.

On ascending the throne, Nana Amoatia Ofori Panin II pledged to introduce real economic development, commercial growth and the general progress and welfare of the people.

In making this pledge, he referred, in particular, to the development of the child, health, education and environment, noting in his coronation speech on 11 October 1999 that: “The success of my reign is dependent, totally, on my ability, as your leader, to ensure that our future – our children – is really secure.”

Osagyefuo has since been active in the campaign to save, maintain and develop the environment with the establishment of the Okyeman Environment Foundation (OEF).

He also instituted the Okyeman Environment Week in the year 2000 to create awareness, education and maintain the agenda for the conservation of the environment within Okyeman.

Nana Amoatia Ofori Panin II believes in child welfare and development and has, thus, initiated a number of schemes to award best-performing students in Okyeman to motivate them to get into various areas of skills development.

The colourful durbar on Saturday was interlaced with drumming and dancing and a display of the rich Ghanaian culture.

Dignitaries present at the ceremony included President Nana Addo Dankwa Akufo-Addo, who was accompanied by his vice, Dr Mahamudu Bawumia.

Dr Bawumia congratulated the Okyenhene for his “stellar leadership” over the past two decades and prayed for long life and excellent health to enable him to continue playing a pivotal role in the development of Ghana.