All seized rosewood to be used to build National Cathedral – Jinapor 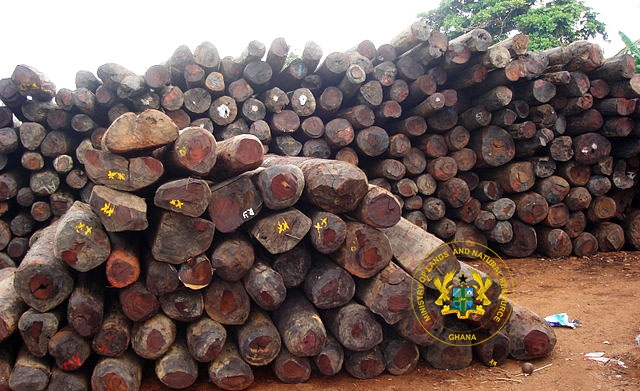 The government will be using all confiscated rosewood for the construction of the National Cathedral, Lands and Natural Resources Minister Samuel Abdulai Jinapor has announced.

Briefing the media about the five containers of rosewood impounded at the Tema Port last month, Mr Jinapor said: “The government is making the decision to take all rosewood confiscated toward the construction of the National Cathedral”.

“So, in addition to the ban on the export, all rosewood confiscated should and will be donated to the National Cathedral.”

“When the National Cathedral turns out to have enough rosewood, we will take other measures either to donate it to other public institutions and if we are minded to have a public auction for domestic use, rest assured it will be done with a sense of integrity,” Mr. Jinapor said.

The minister’s comments come days after the Member of Parliament for Builsa South, Dr Clement Apaak, asked the government, to expedite action in probing the circumstances behind the impoundment of the five containers of rosewoods at the Tema.

He indicated in a press statement that the illegality was committed by members of a certain cartel, despite the government’s ban on rosewood harvesting and logging.

“It remains amazing how rosewood logs can be harvested in the Savanna areas or middle belt of the country and transported all the way through various road checkpoints across the country to the Tema port without being detected”.

“Where are the police, Forestry Commission, customs officials, and all the other law enforcement bodies along the long routes from the Savanna to the Coast?", the opposition MP quizzed.

“This goes to confirm the view expressed by the Minister of Lands and Natural Resources, Mr Samuel Abu Jinapor before parliament’s Public Accounts Committee last month, when I posed a question on the continuing harvesting and export of rosewood, that a cartel is responsible for these illegal activities which are destroying our forests and threatening our environment,” he added.

The statement continued: “The question that arises from the minister’s admission is: what is stopping the government from going aggressively after the syndicate involved in the illegal trade, prosecuting them, jailing them and setting them as examples to the rest of the members of the cartel?”

“What is stopping the government from firing the Forestry Commission officials who are so derelict in their duty and are allegedly neck-deep in these illegal activities that they allow anything at all to pass without cracking the whip? What is stopping the Minister from using the power that the state has vested in him to crack down on the syndicate involved in these illegal activities?” Dr Apaak further questioned.

He, therefore, called for immediate action to be taken to clamp down on those who were involved in the transportation of the rosewood logs.

“There have been numerous previous findings from investigative works done by the Environmental Investigative Agency and media houses in the country that point to the operation of this cartel. But no action is taken against them. Why should it be so? Action is needed now,” he stated.

In his view, “the five (5) containers impounded at the Tema port provide a good opportunity for new minister Samuel Abu Jinapor to show the world that he is not just a tough-talking minister but has the capacity to bring perpetrators of this illegal act to book,” adding: “This incident is a true test of whether he will become a lame-duck accomplice of the illegal rosewood business like his predecessors, or he will actually put the interest of his constituents in Damongo and other parts of the country, including Builsa South, ahead of the interest of the cartel and stop the illegal trade.

“What is clear is that the cartel as he acknowledged which is responsible for this, is testing him. If he allows them to win this test and doesn’t take any action against them, it will open the flood gates for other such illegal activities under his watch. He should be decisive and deal with those involved, “no matter whose ox is gored,” and jail those involved in this illegal activity”.

Dr Apaak also stated that “the lives of the team at the Energy Commission that first detected this illegal act are currently under threat from the cartel as strange men have been going to the port trying to fish them out. The police must act now to protect the lives of these dedicated public servants so they are not harmed by this criminal syndicate”.

Rosewood harvesting in Ghana was banned in 2014.

The ban was lifted in 2017 and the Minister in charge at that time, John Peter Amewu, gave over 20 companies permission to fell the trees.

However in March 2019, the trade was banned again, following alleged corruption and illegal trade of the resource.