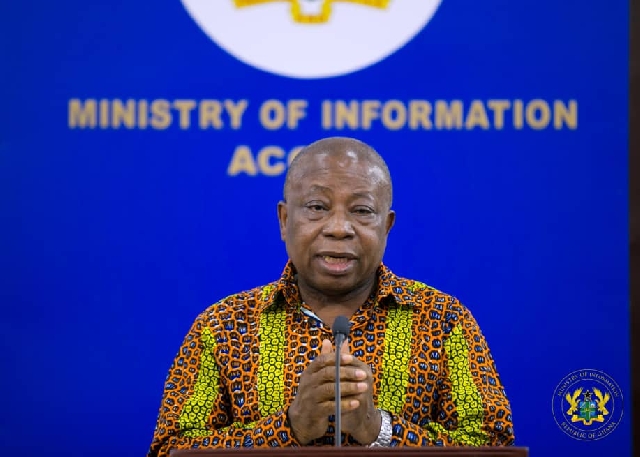 Ghana was allegedly procuring a dose of the vaccine at $19 instead of $10.

Appearing before the nine-member committee on Thursday, 15 July 2021, Mr Agyeman-Manu said: “We are not just terminating the contract because, after the contract, they gave us two weeks to supply the first 300,000 doses of the vaccines that we have ordered based on the letters of credit we have given them as part of the terms of the agreement”.

“But our letters of credit were delayed but got to them later”, Mr Agyeman-Manu said.

According to him, the suppliers came back that “they have run out of stock and that they are waiting on the manufacturer to supply them and they will supply us in two weeks”.

After two weeks, he narrated, “we enquired and they have said still they haven’t received it”.

“So, we started engaging them that if that is the matter, they should permit us to withdraw from the contract so that we can do something different and buy vaccines for ourselves because our faith in them to supply was waning”.

“So, we continuously put pressure on them and they gave us July [to supply]”.

“They gave us verbal notice that they will not be able to supply any longer, and, so, we requested that they terminate the agreement, which they have actually done”.

“So, as we sit here, there is no contract between the two of us.”

A few weeks ago, the Minority in parliament warned the government that it was dealing with “imposters” in its attempt to procure the Sputnik V vaccines to inoculate the citizens against COVID-19.

That was after an investigative report by a Norwegian news portal had revealed that the Ghanaian government, through the Ministry of Health, signed an agreement with the Dubai-based private businessman to procure the vaccines at a higher price by sidestepping regular channels.

Addressing the media on the issue on Thursday, 24 June 2021, Minority Leader Haruna Iddrisu said the caucus, through its investigations, can confirm that “we are dealing with agents that are doubtful in character, doubtful in their capacity to be purporting to undertake the activity of agents in the procurement of COVID vaccines”.

“At best, they are imposters”, he noted.

The Tamale South MP wondered: “Why must a ministry or government be dealing with imposters in a major public health emergency transaction such as COVID?”

“Our caucus can also confirm that these middlemen made no efforts to engage the Russian embassy even when they arrived in Accra”.

“So, even if you’re dealing with an agent who is working with a Russian government, we can establish authoritatively that there is no communication between these agents and even the Russian embassy in Accra”, he noted.

Additionally, he claimed: “Our government did not also contact them for any due diligence, nothing; neither were Russian embassy officials invited to the meetings with these shady characters”.

In the Minority’s view, the “purported vaccine supply agreement” between Ghana’s health ministry signed by sector minister Kweku Agyeman-Manu and a Sheikh on 9 March 2021, “as I indicated, stands in violation of article 181(5) of the 1992 Constitution, which makes it an international economic transaction”.

“We are of the view that the Sputnik V contract signed between the ministry of health, for and on behalf of the government of Ghana, and the third party, is not in the interest of Ghana”, Mr Iddrisu asserted.

He stressed: “It is not probably the best to justify the safety and health of Ghanaians and, therefore, we are calling for a halt and a probe”.

Also, “We have, accordingly filed a parliamentary motion to demand a bi-partisan investigation and inquiry into the matter and the report will advise us, accordingly, on what course of action we should take”.

A few weeks ago, Mr Agyeman-Manu wondered why Ghanaians would be ridiculing him in connection with attempts by the government to procure the vaccines to save lives.

Speaking at the launch of the Pest and Vector Control Association of Ghana in Accra, Mr Agyeman-Manu said he was only acting in the good interest of Ghanaians.

“I had an obligation to try to see how we can arrive at our herd immunity”, he said.

According to him, “when we started looking for vaccines to procure, intermediaries were not part of our agenda”.

“We were looking at what we will get from COVAX”, he said.

“We could not have waited between March and August because we were in the second wave and we were dying more than when we had the disease in 2020”, he noted.

In his view, “basic economics will tell you that in terms of scarcity, the market is the suppliers’ market”.

“He or she dictates the price, not the buyer”, adding: “I am surprised”.

“We all learned these things at O-level, so, why should I be a subject of ridicule?” he asked.